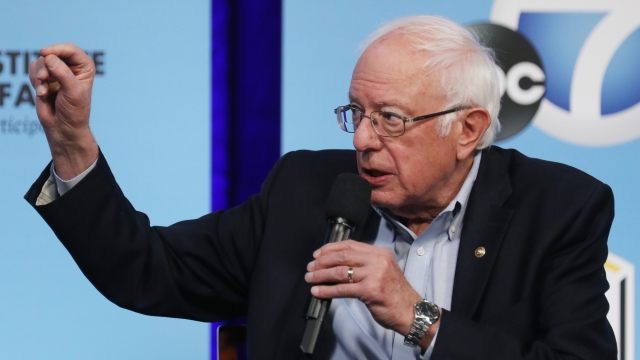 SMS
Bernie Sanders Unveils $150 Billion 'Internet For All' Plan
By Adam Elrashidi
By Adam Elrashidi
December 6, 2019
The proposal aims to improve broadband access for people across the U.S., especially those living in rural or tribal areas.
SHOW TRANSCRIPT

Sen. Bernie Sanders wants to bring high-speed internet to "every household" in the U.S. On Friday, the 2020 Democratic presidential hopeful promised to invest $150 billion into improving broadband access across the country. He said his proposal aims to help states and municipalities build "publicly owned and democratically controlled" networks.

Sanders said the plan is specifically designed to help people living in affordable housing, people with disabilities and those on tribal lands, noting that he would set aside $7.5 billion toward building networks in Native American communities.

Funding for the plan would come via the Green New Deal. And receiving grants would be conditioned on providing universal service, minimum speeds, privacy, and the creation of union jobs. It would also preempt the 19 state laws that limit or bar municipal and publicly owned broadband.

In a statement, Sanders said: "Access to the internet is a necessity in today's economy, and it should be available for all. We are going to take on the greedy internet, telecom, and cable monopolies and put an end to their absurd prices."

The FCC reported in 2018 that the U.S. is ranked 10th out of 28 countries for download speed, and seventh out of 29 for fixed broadband price. But millions of people in tribal and rural communities continue to lag behind urban areas in mobile broadband deployment. In August, the agency announced $4.9 billion in funding over the next decade for "maintaining, improving and expanding" broadband networks in rural areas.