Sanders Supporters Call Out The DNC With March From D.C. To Philly 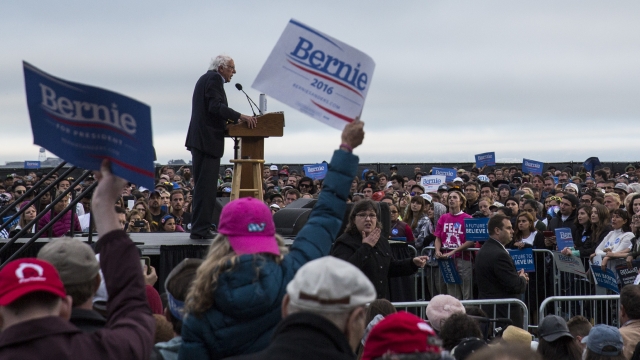 SMS
Sanders Supporters Call Out The DNC With March From D.C. To Philly
By Eugene Daniels
By Eugene Daniels
June 7, 2016
The march will last for 10 days and will go from Washington, D.C., to the Democratic National Convention in Philadelphia.
SHOW TRANSCRIPT

The Democratic primary has been much more intense than anyone could've imagined. But after winning more delegates and votes than her challenger Bernie Sanders, Hillary Clinton has been declared the presumptive nominee by the media.

Understandably, some Sanders supporters are having a tough time accepting that. So they're marching for 10 days.

It's called DC to DNC. Supporters will meet in Washington, D.C., on July 15 and march to the Democratic National Convention, which starts July 25 in Philadelphia, in support of Sanders and democracy.

"We want an actual democracy that represents all. The way our country came together was not a representation of all, it was a representation of the few who made the rules for all. And it's not gone any better sense," Ed Higgins, the campaign director of DC to DNC, said.

The group is demanding a few things, most importantly "that the DNC accept Senator Bernie Sanders as the Nominee for the next President of the United States."

Sanders and his supporters have repeatedly criticized the Democratic primary process as flawed. Now, they're hoping to convince superdelegates to flip their pledges of support and choose Sanders over Clinton.

That's a tough sell; Clinton still has a healthy lead on Sanders both in terms of pledged delegates and the popular vote.

And there's the fact that Sanders has spent years fighting the establishment and has railed against superdelegates as undemocratic in the past. It seems unlikely Sanders will be able to persuade them to go against the will of the voters now.