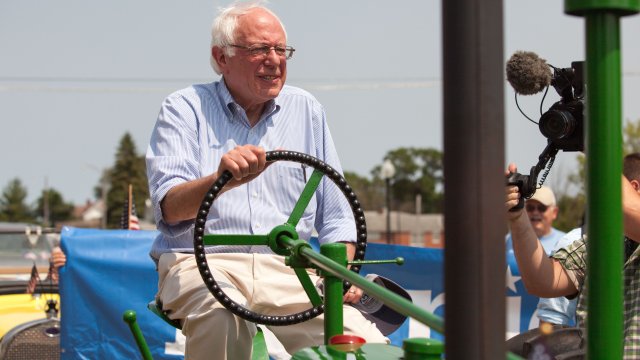 The Democratic presidential hopeful offered a grim portrait of distressed communities and families short of food and other staples in the nation's breadbasket. And he singled out an alleged culprit: big agribusiness.

"In rural America, we are seeing giant agribusiness conglomerates extract as much wealth — as much wealth out of small communities as they possibly can while family farmers are going bankrupt and, in many ways, are being treated like modern-day indentured servants."

At a fairgrounds in Osage, Sanders called for "fundamental change" in agriculture policies to reorder America's food production chain.

Iowa, an early-primary state, widely supported Donald Trump in 2016. But Sanders is clearly hoping to win some converts. He criticized President Trump's trade policies for hurting farmers in the state and across the U.S. And he called for "fair trade partnerships," debt relief and technical assistance to help farming families.

"I will not write off rural America," he vowed.