Sanders Pushes Back Against Report She's Leaving The White House 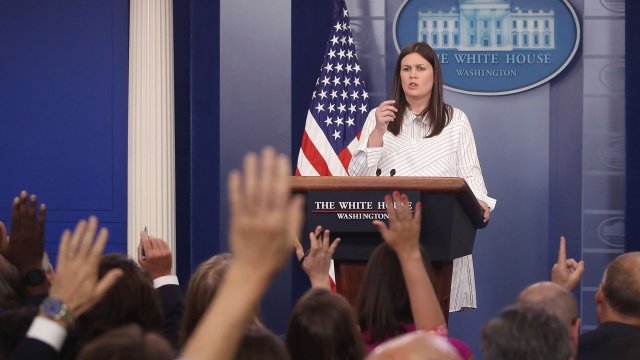 Sanders tweeted, "Does @CBSNews know something I don't about my plans and my future? ... I love my job and am honored to work for @POTUS."

The news outlet reported Sanders told friends that she intends to leave the Trump administration at the end of 2018. It also said principal deputy press secretary Raj Shah was eyeing an exit, but CBS News didn't give a timetable for his departure.

He was appointed to the position last September after serving as deputy assistant to the president and deputy communications director. Sanders took over the press secretary role after Sean Spicer resigned in July 2017.

After CBS published its report, Fox News reported it had learned both Sanders and Shah "are weighing future options." It pointed out that doesn't necessarily mean they'll be leaving the White House.

As of Thursday morning, Shah had not responded to the reports about his future.