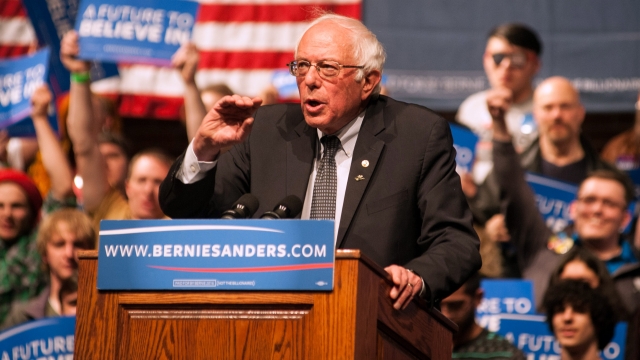 SMS
Sanders Projected To Win Wyoming But Still Has A Long Way To Go
By Eugene Daniels
By Eugene Daniels
April 9, 2016
Sanders has won the last seven contests but still lags behind Hillary Clinton by more than 200 pledged delegates.
SHOW TRANSCRIPT

Sanders has been on a tear the last few weeks, winning the last seven contests. But the wins haven't really changed the fact that Sanders has a long way to go when it comes to winning the Democratic nomination.

He is still more than 200 pledged delegates behind rival Hillary Clinton. The Wyoming win helps, but not by much; only 14 pledged delegates were up for grabs in the state. And since the Democratic Party allocates all delegates proportionally, Sanders will still split delegates with Clinton.

But the wins do give the Sanders campaign a morale boost as the primary heads to New York, which has 247 pledged delegates. New York's primary is April 19.

This video includes images from Getty Images and clips from Bernie 2016, NBC and MSNBC.