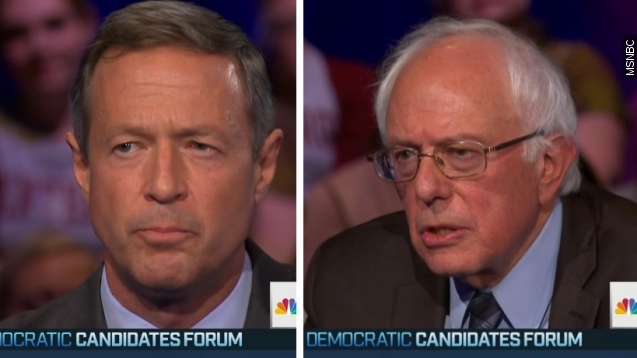 MSNBC's Rachel Maddow sat down to question all three Democratic candidates, and the underdog candidates seized the moment.

When Rachel Maddow hosted MSNBC's democratic presidential forum, it was a real shift from what we've seen so far during the presidential race. Each candidate did what was essentially a one-on-one interview with the TV host. (Video via MSNBC)

The forum covered topics including everything from the American involvement in Syria to the economy and almost everything in between. But one thing that became clear –– each of the candidates is courting black votes very seriously. (Video via MSNBC)

"Given the legacy of racism and slavery and the way that it is intertwined with public safety, with law enforcement and particularly with drug policies in our country, all of us have a responsibility to be on a constant search for policies that work." former governor Martin O'Malley said.

"I was involved in civil rights demonstrations and I was there with Dr. King in the march on Washington, so I have a long history," Senator Bernie Sanders said when asked how his presidency would help African-Americans.

"It's hard for me to understand why the suspension and expulsion rate is so much higher for black kids than for white kids," former Secretary of State Hillary Clinton told Maddow.

And it makes sense. Pew Research Center found 80 percent of African Americans identify as part of the Democratic party, something President Obama used to his advantage in both the 2008 and 2012 elections. (Video via The White House)

"It does not hold that a return to the old ideologies of the past or debating the pros and cons of socialism is going to solve our problems. Nor will declaring all Republicans our enemies help us bring people together," O'Malley said about his opponents.

And Sanders didn't mind piling on Clinton, while at the same time calling out the media for wanting him to attack Clinton. (Video via Bernie 2016)

“I have many disagreements with Hillary Clinton, and one of them is that I don’t think it’s good enough just to talk the talk on campaign finance reform,” he said.

But Clinton didn't spend any time talking about the other candidates, something that's much easier to do when you're a front runner. She instead was able to spend time on the issues — including military intervention abroad. (Video via Hillary for America)

Clinton said, "I will not, I think it's irresponsible to rule out force. I will not do that. But it should always be the last resort, not the first choice."

The candidates will all be on the stage together for the second Democratic debate on CBS November 14.