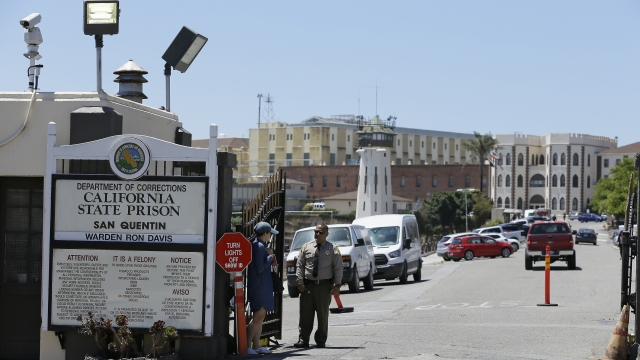 SMS
More Than 1,100 Inmates Infected With COVID-19 At San Quentin Prison
By Peter Hecht
By Peter Hecht
July 2, 2020
More than 1,100 out of 3,700 inmates are infected at California's oldest prison after prisoners were transferred from another facility.
SHOW TRANSCRIPT

A severe COVID-19 outbreak is fanning through California's notorious San Quentin State Prison after an alleged botched transfer of inmates from another prison impacted by the virus.

More than 1,100 of San Quentin's 3,700 inmates have been infected with coronavirus, along with nearly 100 correctional officers and staff. And a state lawmaker is branding the outbreak as an epic institutional failure.

Assemblyman Marc Levine says the virus surge at San Quentin, near San Francisco, threatens both the prison system and communities beyond.

"COVID-19 doesn't stay behind bars. COVID-19 is something that leaves the prison, whether it's because the prisoners need care or because staff have become ill and infected and bring that home with them as well. It's a tragedy that could have been prevented and what we're looking at right here is the worst prison health screw up in state history," Levine said.

San Quentin had no known coronavirus cases when California authorities recently moved 121 inmates there from a Southern California prison. The California Institution For Men in Chino had had 700 cases and nine deaths. Authorities transferred inmates without known infections to thin out the population.

But The New York Times reported that some were sick and coughing on buses to San Quentin and that an outbreak accelerated there after their arrival.

San Quentin, opened in 1854, is California's oldest prison and home to its death row. Gov. Gavin Newsom last year put a moratorium on executions there. Authorities said more than 160 death row inmates have been infected with COVID-19, with one confirmed death.

In a statement, the California Department of Corrections and Rehabilitation said prison officials are (quote) "working around the clock to fight COVID-19, not just at San Quentin, but at all institutions." The statement said: "We will continue to look at ways to improve our response efforts in every way possible."