San Francisco 49ers On The Brink Of An Offseason Collapse 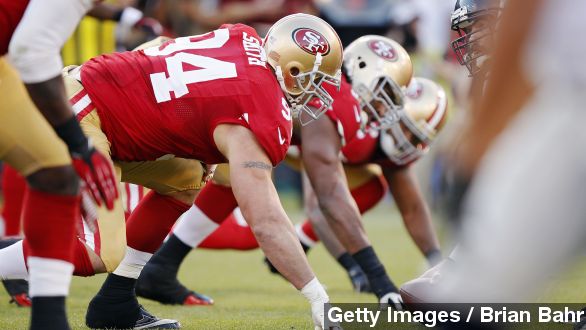 SMS
San Francisco 49ers On The Brink Of An Offseason Collapse
By Jay Strubberg
By Jay Strubberg
March 10, 2015
Expected player retirements and a series of free-agent departures highlight a major offseason shake-up for the 49ers.
SHOW TRANSCRIPT

Well, you miss one NFC Championship in the last four years, and all of a sudden, your franchise is once again in dire straights. The San Francisco 49ers are probably going to look a lot different heading into the 2015 season.

For starters, not just one, but two key players on the defensive side of the ball are expected to hang it up for good Tuesday.

Defensive end Justin Smith will reportedly announce his retirement, to no real surprise. And that's a big hit. The 14-year-veteran made five consecutive trips to the Pro Bowl, all while wearing the red and gold.

But more of a shocker: linebacker Patrick Willis is also expected to retire. Willis, who's only 30, made it to the Pro Bowl every season of his 8-year career except the last one — and that's mainly because an injury kept him on the sidelines.

As you can imagine, all of this is hitting some 49ers fans harder than others.

"As a 9ers fan, how do you feel today? Did you really throw up twice today?"

But Smith and Willis aren't the only ones expected to leave San Francisco. More top players could also be on the move in what has developed into quite a chaotic offseason for the team.

According to sources for ESPN's Adam Schefter, 3-time Pro Bowl guard Mike Iupati is headed to Arizona. And it looks like WR Michael Crabtree isn't returning either, with both the Bills and Vikings rumored to pick him up.

Crabtree will reportedly be replaced by wide-receiver Torrey Smith, who opted not to return to Baltimore.

Oh, yeah, and then there's the 49ers all-time leading rusher, Frank Gore, who, according to Schefter, is jumping ship to Philadelphia.

"How concerned are you with not fitting the standard image of a quarterback in the NFL?" ESPN's Stevland Wilson said.

"I don't want to be the standard image," Kaepernick said.

Plus, those Colin Kaepernick trade rumors just won't go away.

NFL draft analyst Jayson Braddock says the Bears were in talks to trade for the 27-year-old star QB, but both Schefter and the 49ers say the rumor is completely false and he's not going anywhere. (Video via Beats Electronics)

Assuming Kap stays, several outlets are still basically calling all this mayhem a total collapse of what was a recently-revitalized franchise.

But a CBS sports writer puts things in perspective: "A lot of these things are just part of the cycle of life surrounding an NFL team. Older players retire and free agents find different homes. ... Even the Rolling Stones bring in new faces every now and then."

Perhaps the makeover is fitting, given the departure of head coach Jim Harbaugh late last year. Harbaugh was brought in to help restore San Francisco's winning legacy, and he did just that.

Under his direction, the 49ers made it to the NFC championship three consecutive seasons, with one Super Bowl appearance. But that's all the past. Who knows where they go from here?