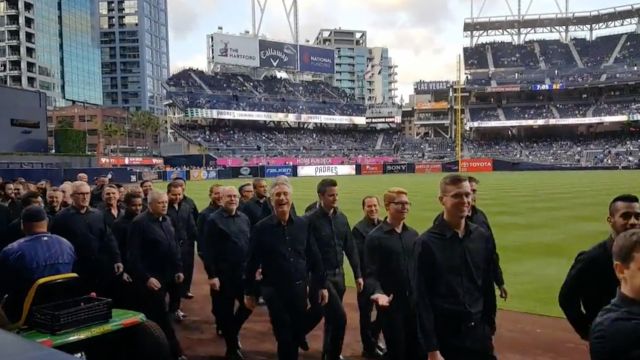 A San Diego-area gay men's chorus was supposed to sing the national anthem at the Padres game Saturday — but that's not exactly what happened.

"Whose broad stripes and bright stars, through the perilous fight ... " the chorus sang during a previous performance.

Instead, with all the men lined up and ready to go on the field, a prerecorded track featuring a female voice started playing — and it kept playing for the entirety of the anthem. The chorus called the moment "a nightmare."

"We just kind of stood there, and we thought, 'Maybe they'll now reset it and play our music.' That never happened. We just stood there. ... One person yelled, 'You sound like a girl.' Somebody else yelled, 'That's the best you've ever sounded,'" SDGMC Executive Director Bob Lehman told KSWB.

The Padres publicly apologized after the game, releasing a short statement.

But the chorus said the two-sentence statement wasn't enough and that it didn't "appropriately address the gravity of the situation."

On Sunday, the Padres released another statement. The team said an investigation found there was "no evidence of malicious intent" from anyone involved, but "based both on the unintentional mistake that was made, as well as the failure to immediately intervene and correct the situation," the team has cut ties with the third-party contractor responsible and has disciplined another Padres employee.

The chorus has performed at Petco Park twice before Saturday's game, both times without incident. The chorus was there on Saturday as a part of the Padres' Pride Night, an event aimed at celebrating San Diego's diverse community.