San Diego Couple Dies Within 24 Hours Of Each Other 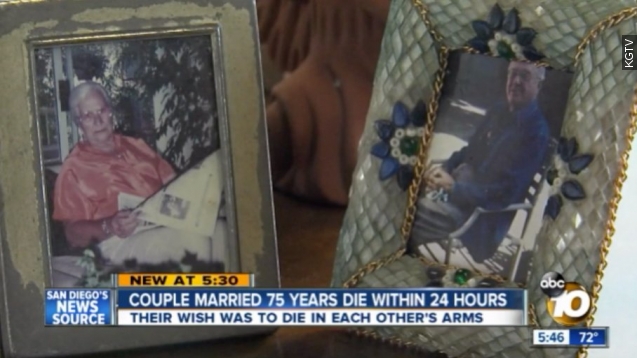 SMS
San Diego Couple Dies Within 24 Hours Of Each Other
By Katherine Biek
By Katherine Biek
June 30, 2015
Jeanette and Alexander Toczko were together almost 75 years before they passed away within 24 hours of each other in June.
SHOW TRANSCRIPT

"They fell in love. They were boyfriend and girlfriend when they were 8 years old," Richard Toczko told KGTV.

Jeanette and Alexander Toczko were married for almost 75 years before they died within 24 hours of each other.

"Their hearts beat as one from as long as I can remember," Aimee Toczko-Cushman said.

"They wanted to go in their own beds, holding hands and in each other's arms," Richard Toczko said.

The Toczko's children told Newsy's partners at KGTV their mother's one wish was to make it to her 75th wedding anniversary, which was June 29. The family decided to celebrated early after hospice brought a bed to their home for Alexander.

"My mother was thrilled, thrilled to death because it was their anniversary and she knew that he was going and that they had made it to 75 years," Aimee Toczko-Cushman said.

According to their obituary, Alexander died shortly afterward on June 17. His wife, Jeanette, followed the next day.

It's a heart-breaking story, which is why there's actually a medical condition known as broken heart syndrome.

The American Heart Association says broken heart syndrome "can be caused by an emotionally stressful event" like the death of a loved one. Its symptoms are similar to those of a heart attack.

"He died in her arms, which is exactly what he wanted," Aimee Toczko-Cushman said of her father.