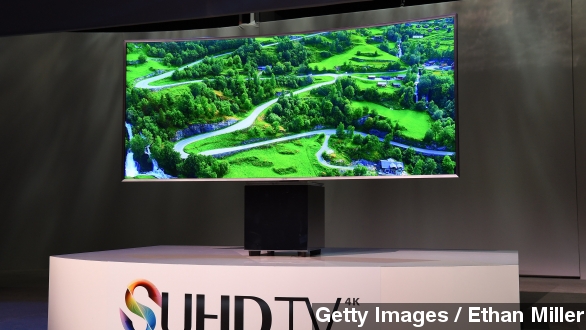 “Pushy salesman” is probably not a default personality setting for Samsung’s Smart TVs.

But multiple reports of aggressive ads from Samsung TVs surfaced this week, including these on Reddit and in the support forums for Australian cable company Foxtel.

The TVs are reportedly injecting ads into live cable feeds, and into playback of local content from a media server. (Video via Samsung)

Samsung Australia issued a statement, published here by CNET. The company called the injection “a result of an error that occurred as part of a recent software update that was not intended for the Australian market.”

An honest mistake, in other words. But as Mashable notes, “It definitely sounds like Samsung does have an intent to insert ads like these in some markets.”

GigaOM writes “the faux pas points to a bigger issue: Device makers like Samsung have long tried to figure out how to monetize their platforms and generate additional revenue in a time where margins on hardware are slim at best.”

It’s not the best PR news for Samsung, as it’s already been in the headlines once this week for an Orwellian-sounding line in its privacy policy.

“If your spoken words include personal or other sensitive information, that information will be among the data captured and transmitted to a third party through your use of Voice Recognition.”

Samsung has addressed the speculation around what that does and doesn’t mean — about as plainly as possible — and reworded the offending clause:

“Samsung will collect your interactive voice commands only when you make a specific search request to the Smart TV.”

Samsung points out users can also disable voice recognition completely, if they so choose. But it wouldn't be much of a smart TV then, would it?