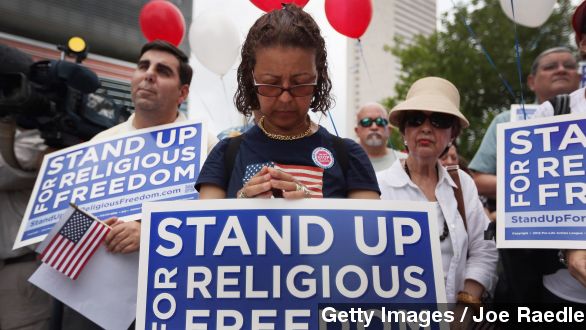 On Monday, the Indiana House of Representatives voted in favor of Senate Bill 101, also known as the Religious Freedom Restoration Act.

That bill applies the religious freedoms ensured in the establishment clause to entities like corporations and companies. But critics argue all the bill really does is give a legal defense to business owners who want to discriminate against same-sex couples. (Video via WISH)

That's been enough to attract international coverage from outlets like the BBC, and similar laws have made headlines in the past.

Those laws have been popping up more and more, primarily in conservative states, sparked by incidents like bakeries refusing to make cakes for same-sex couples. (Video via CBS)

And as more states have legalized gay marriage through the judiciary, opponents of gay marriage are pushing back through religious freedom laws.

In Indiana, the law has jeopardized the future of Gen Con — a tabletop gaming convention that's estimated to bring some $50 million in economic impact to Indianapolis. The organizers have threatened to relocate should the bill become law. (Video via Fantasy Flight Games)

Legal scholars are divided over whether the law would actually change anything, with some arguing it's more sweeping than legislation in other states.

The bill got final approval from the state Senate on Tuesday, but it's not clear when Gov. Mike Pence will sign the bill, which he pledged to do as soon as it reached his desk. (Video via WRTV)