Same-Sex Marriage And Abortion Are Now Legal In Northern Ireland 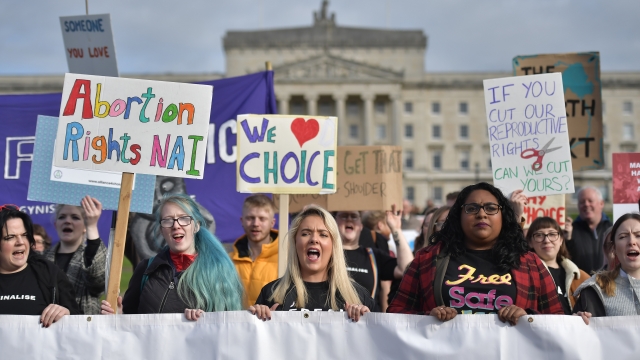 Abortions and same-sex marriages are now — for the first time — legal in Northern Ireland.

Legislation that the U.K.'s Parliament approved earlier this year to legalize same-sex marriage and extend abortion rights in Northern Ireland went into effect at the stroke of midnight Tuesday. Until now, the region was the only part of the U.K. that did not allow same-sex marriage, and it had the country's most restrictive abortion rules.

With abortion now decriminalized, no criminal charges can be brought against women who seek abortion services or against health care workers who provide an abortion or assist in one. All existing investigations and criminal prosecutions relating to abortions were also dropped on Tuesday.

But the final legal framework for abortion won't go into effect until the end of March. As such, those seeking a surgical abortion still have to travel to other parts of the U.K. for the time being; the British government will cover travel expenses. Medical assistance will be provided for those who seek an abortion using pills. According to the BBC, once the regulations are implemented next year, medical abortions will be provided on two hospital sites in Northern Ireland.

The legislation also mandates that same-sex marriage regulations be put in place by Jan. 13. Because U.K. couples have to indicate they're getting married at least 28 days before doing so, the first weddings are expected to be held in the week of Valentine's Day.