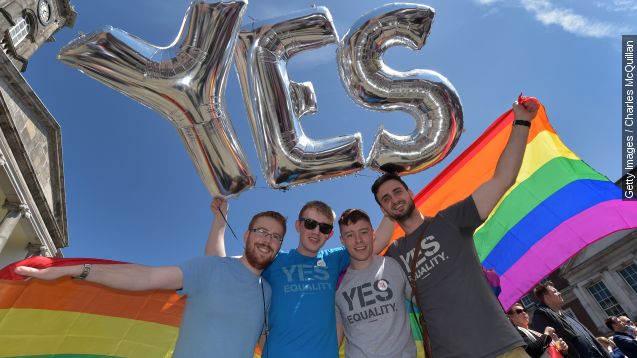 Same-sex couples can now legally tie the knot in Ireland.

Ireland's justice minister has signed the commencement order for the Marriage Act 2015, meaning same-sex marriage in the country is officially legal. (Video via CNN)

"It's just equality. That's what it is," a couple told Channel 4 News about the importance of the vote.

For same-sex couples who wed abroad, their marriages are automatically recognized under the law.

Those who are already in civil partnerships are required to give state officials a five-day "intention to marry" notice before they wed. Those just now registering for same-sex marriage must give a three-month notice. (Video via CBS)

In May, Ireland became the first country to legalize gay marriage via popular vote, with 62 percent of voters saying yes to the ballot measure. (Video via The National)

Irish views on gay marriage have done an about-face since the early '90s. Ireland didn't decriminalize homosexual acts until 1993, and now, 22 years later, it's one of few nations to support same-sex unions. (Video via BBC)