'Salmon Cannon' Could Save Fish By Firing Them Into Air 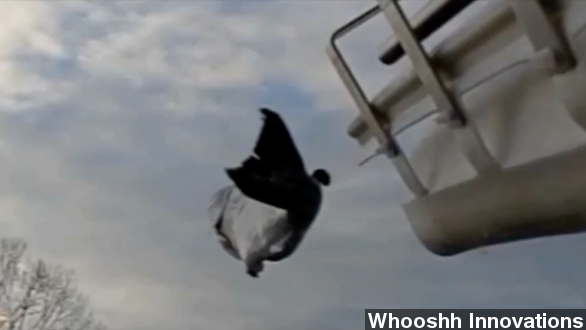 SMS
'Salmon Cannon' Could Save Fish By Firing Them Into Air

By Lauren Zima
August 14, 2014
A new invention fires fish over dams — salmon, specifically — and could be an odd but effective solution in helping them migrate.
SHOW TRANSCRIPT

Saving the environment is rarely as easy as shooting fish in a barrel.

But it might be as easy as shooting fish out of one. This is the Hydrovision 2014. Salmon swim into it, and it gently and quickly sucks them through a tube, spitting them out on the other side of a dam and into the water. It's pretty awesome technology — the fish go through at up to 22 mph, they're misted during the trip, and in just a few seconds they land in the water on the other side. The machine can transport dozens of fish per minute.

But why do we need a salmon sucker?

NATIONAL GEOGRAPHIC: "Most adult salmon spend their lives at sea, but when it comes time to lay eggs, they head home to the river they were born in."

You can imagine if a fish is traveling thousands of miles, it might encounter a dam or two.

Fish ladders have been used to help get fish over obstacles. But they've been criticized.

Groups like Idaho Rivers United say the ladders are too difficult and fish die during the passage.

A paper by a Queens College professor of biology declared them ineffective last year.

So could what the team at Whooshh Innovations affectionately calls the "salmon cannon" be the solution to saving the fish? The system's been tested at three sites in Washington state. In September the Department of Energy will run another test.

By the way — how did Whooshh even get the idea? The group actually invented this system to transport fruit so it wouldn't get bruised.

The company's president told The Verge: "We put a tilapia in the fruit tube. It went flying, and we were like, ‘Huh, check that out.'"