'Sailing' Spiders Prove Escaping From Them Is Futile 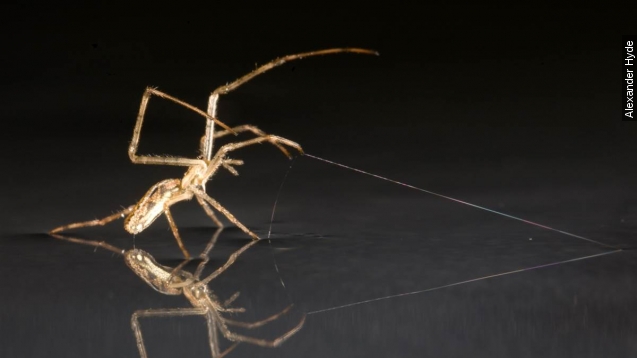 University of Nottingham researchers found that some species of spiders adopt poses allowing them to use wind to glide across surfaces of water.

Arachnophobes: If you thought there was an ocean wide enough to keep spiders away, guess again.

Researchers the University of Nottingham's Spider Lab found some species of spiders are like tiny Magellans, in that they can "sail" across the ocean to colonize new areas. Their study is published in the journal BMC Evolutionary Biology.

To explore the seafaring characteristics of spiders, researchers collected 325 of them from 21 species around Nottingham in the U.K. When placed on water, more than a third of the spiders adopted yoga-like postures that allowed them to use wind and glide across the surface.

Postures like the legs-up-legs-out and the butt-up-head-down. Don't try this out on the water, folks.

Some spiders were also able to use their silk to attach to other objects, presumably to float to a safer location.

Scientists already knew terrestrial spiders had the ability to travel through a technique called ballooning, where the creatures use their silk to fly through the air. But sailing is a newly-observed trick, perhaps because they are so small. (Video via Pristurus / CC BY SA 3.0)

"It shows that when they land somewhere that's not really ideal for them, they may have strategies to cope with that," study co-author Dr. Sara Goodacre said.

Goodacre added that some spiders are important for agricultural reasons because they can act as pest controllers on, let's say, a farm. This recent study helps explain how spiders are able to get there in the first place.

As a follow-up, Goodacre says Spider Lab researchers hope to examine spiders that have taken the plunge and live below the surface of water — like these guys. Good luck sleeping!