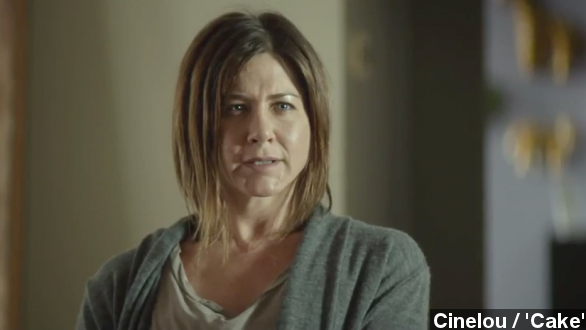 SMS
SAG Awards Nominations: 'Birdman' Flies, Can Aniston Soar?
By Lauren Zima
By Lauren Zima
December 10, 2014
"Birdman" is in the lead with four nominations, and Jennifer Aniston scored her first-ever film nod. The SAGs can be the path to the Oscars.
SHOW TRANSCRIPT

This year's Screen Actors Guild nominations are out — and when it comes to films, "Birdman" is flying high.

The movie scored four nominations in major categories — leading male for Michael Keaton, supporting for Edward Norton, supporting female for Emma Stone and a nom for outstanding performance by the whole cast.

Some standout performances in the lead female category — Reese Witherspoon is up for "Wild," and it'll be more Oscar buzz for Jennifer Aniston now — she's up for "Cake." This is her first SAG nomination for a movie role.

As she says in the film, "I'm doing really well."

"Boyhood" was close behind "Birdman" overall with three major nominations — supporting nods for Ethan Hawke and Patricia Arquette and a nomination for the whole cast.

"Wish I could use the bumpers," Mason says in the film.

"You don't want the bumpers. Life doesn't give you bumpers," his father, Hawke's character, replies.

Also up for three is "The Theory of Everything" with nods for Eddie Redmayne and Felicity Jones in the leading spots and a nom for the whole cast. That "whole cast" nod is the SAG's equivalent of best picture.

And Benedict Cumberbatch-starring "The Imitation Game" hasn’t hit theaters yet, but it's up for three awards in those same three categories.

On the TV side, no big surprises. "Modern Family," "Game of Thrones," "Homeland" and "House of Cards" all earned nominations.

Viola Davis was recognized for her work on "How to Get Away With Murder."

And hey, cult following — Cumberbatch got a TV nod too for playing Sherlock Holmes.

Ultimately studios hope the SAGs will build box-office buzz — "Foxcatcher" isn't out yet, but Steve Carell and Mark Ruffalo were nominated. Hey — don't you want to see creepy Steve?

"What do you hope to achieve, Mark?" Carell's character asks a promising wrestler.

And Variety tells us about 80 percent of SAG winners in those individual acting categories go on to win Oscars in those categories.

But making headlines for getting snubbed: "Selma." The Oprah Winfrey-produced flick didn't get one nomination, and as the LA Times' Glenn Whipp put it on Twitter, "62 actors nominated on film side between ensemble and individual categories. All of them are white."

Also getting no love — the critically acclaimed "Interstellar." So if you were hoping for another awards season of Matthew McConaughey moments, well ...

Then again, another hat tip to Variety — the outlet notes studios didn't provide copies of "Selma" and "Interstellar" to the nominating committee.

That happened with  "The Wolf of Wall Street," and it went on to the Oscars.

Plus, "Interstellar" will likely be seen as more of a visual film.

The SAGs hit your screen Jan. 25, and Newsy will be watching.