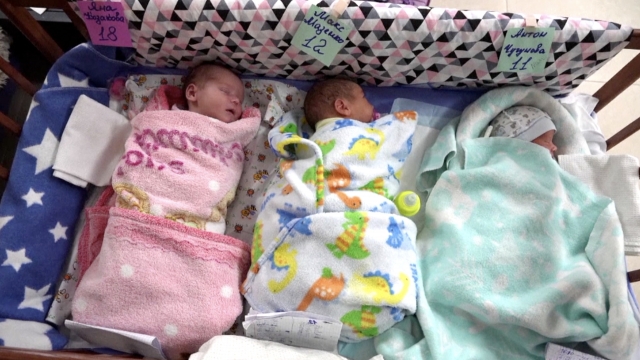 SMS
Safety Concerns For Ukrainian Surrogate Mothers And Babies
By Bianca Facchinei
By Bianca Facchinei
March 25, 2022
Since the war began, getting surrogate babies from Ukraine to their intended parents has required extensive security and top-secret missions.

The war in Ukraine has disrupted trade and threatened the global economy, from oil to wheat.

But there's another major market in the country that now faces an uncertain future: The surrogacy industry.

"Now I will show you our bomb shelter where we will transfer our clients and their newborns in case of outbreaks of hostility in Kyiv," BioTexCom Administrative Manager Oksana Zhmurko said.

Since the war began, getting surrogate babies to their intended parents has required extensive security and top-secret missions.

Bryan Stern is the founder of Project Dynamo, which is a Florida-based nonprofit that's been rescuing people from Ukraine, recently including a set of twins born from a Ukrainian surrogate.

Some intended parents were able to rescue their newborns just in time, but it's unclear how many surrogate babies are still waiting to be united with their families. Meanwhile, others are waiting for their children to be born, and figuring out a way to eventually retrieve them safely. And then more intended parents are wondering if their embryos are safe in storage.

The chaos highlights what some say is a lack of safeguards in global surrogacy, which is an industry estimated to be worth billions and still growing.

"If there had been more regulation, it's less likely the industry would have grown as much because the industry is looking for places with minimal or no regulation," Center for Genetics and Society's Surrogacy360 Program Director Emily Galpern said.

In Ukraine, the intended parents become legal parents at the moment of conception. But if a pregnant Ukrainian surrogate flees for safety to a country with different surrogacy laws, she could be declared the legal parent instead.

"International surrogacy is really fraught with a lot of challenges. It's much more complicated than domestic surrogacy," Galpern continued.

It's also reignited the longtime debate over whether surrogacy should be legal, in part, due to what critics say is a major power imbalance between the intended parents and the surrogate.

"I always say it's when the really rich people start getting harmed, then maybe the needle will move," Center for Bioethics and Culture Network President Jennifer Lahl said. "But so far, the rich people aren't being harmed. They're the ones that still end up with the product, you know, the take-home baby."

Experts point out that fertility clinics and their clients have spoken out about what the war has meant for them. But we haven't heard from nearly as many surrogates, many of whom are now in an impossible dilemma: protect herself or the baby she's carrying for another family.