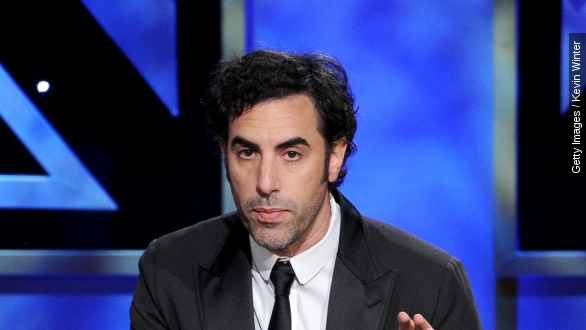 SMS
Sacha Baron Cohen's Role In Freddie Mercury Biopic Uncertain
By Evan Thomas
By Evan Thomas
March 29, 2015
Rumors conflict over whether or not the actor will return to head up the troubled Queen film.
SHOW TRANSCRIPT

Earlier this week, Queen manager Jim Beach was at the Artist and Manager Awards, where he said, "We have now managed to persuade Sacha Baron Cohen to write, produce and direct this movie, and he has also agreed to star."

But the same day, Queen guitarist Brian May published a backtrack: He characterized the development as a "joke that Jim threw in during his acceptance speech. I'm afraid some folks might have taken it seriously!"

The back-and-forth is just the latest in what’s been a rocky history for the film. The biopic was first confirmed back in 2010, then unconfirmed as recently as 2013.

Cohen was widely seen as a shoo-in for the role of Mercury. While the actor is known for his more comedic roles in movies such as "Borat and "The Dictator," he's also played more serious parts, such as in the 2012 film adaptation of "Les Miserables."

And he's said to bear a reasonable resemblance to the singer.

But Cohen left the project in 2013, after his vision of a grittier tell-all didn't mesh with Queen's plans for a PG film.

At the time, Brian May said, "We felt that his presence in the movie would be very distracting."

The biopic still doesn't have a release date. Cohen himself has yet to comment on the rumors.