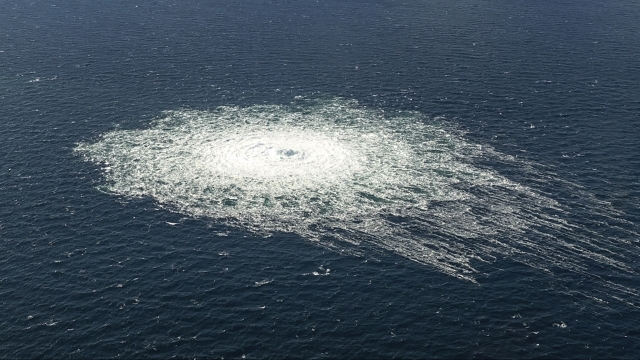 The European Union suspects that damage to two underwater natural gas pipelines was sabotage and is warning of retaliation for any attack on Europe's energy networks, a senior official said Wednesday, as energy companies began ramping up security.

The episode underscored the vulnerability of Europe’s energy infrastructure and further heightened tensions in the continent that has been rocked by the seven-month war in Ukraine. 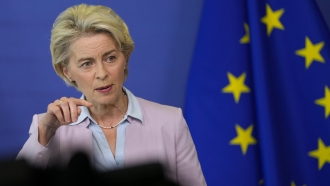 Seismologists reported that explosions rattled the Baltic Sea before unusual leaks were discovered Tuesday on two underwater natural gas pipelines running from Russia to Germany. The incidents came as the EU struggles to keep a lid on soaring gas and electricity prices.

“All available information indicates those leaks are the result of a deliberate act,” EU foreign policy chief Josep Borrell said in a statement on behalf of the bloc's 27 members. “Any deliberate disruption of European energy infrastructure is utterly unacceptable and will be met with a robust and united response.”

Some European leaders and experts pointed to possible sabotage given the energy standoff with Russia provoked by the war in Ukraine. The three leaks were reported on the Nord Stream 1 and 2 pipelines, which are filled with natural gas but aren't delivering the fuel to Europe.

The pipelines allow gas to be piped to Germany without transiting through Ukraine or Poland. The damage means that they are unlikely to be able to carry any gas to Europe this winter even if the political will to bring them online emerged, according to analysts. 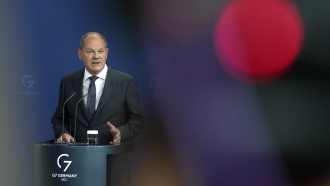 The extent of the damage to the pipelines, along with the political ramifications, raises serious doubts about the future of the Nord Stream projects. Germany was heavily criticized for the project by the U.S. and many of its European partners, which said that it only increased Europe’s reliance on Russian gas imports.

While it remains unknown who might be responsible for the damage, given its undersea location, Polish Foreign Minister Zbigniew Rau said Tuesday that the leaks could be part of Russia’s hybrid war on NATO.

“The explosions took place very close to Danish territorial waters, but not inside them, because that would have meant NATO territory,” Rau said during a discussion at the Center for Strategic and International Studies in Washington.

“This could mean that someone is trying to intimidate the countries of the Baltic Sea. With the exception of Russia, all these countries are NATO members or are aspiring to membership," he said.

Kremlin spokesman Dmitry Peskov said allegations that Russia could be behind the incidents were “predictable and stupid.” He told reporters in a conference call that the damage has caused Russia huge economic losses.

Even with eyes turning toward Russia, Anders Puck Nielsen, a researcher with the Center for Maritime Operations at the Royal Danish Defence College, said that it would be hard to establish who is responsible and just as tough to prevent similar incidents.

“We have pipelines, we have communication cables like the internet. We have just power lines running on the seabed. All of this is vulnerable and our societies are very dependent on it. And it’s very, very difficult to monitor what’s going on and to prevent a case of sabotage,” he told The Associated Press.

German Defense Minister Christine Lambrecht said “the circumstances surrounding this disturbing event must now be quickly clarified and those responsible identified." Borrell said the EU will support any investigation into the damage, and will “increase our resilience in energy security.”

Energy companies and governments are already reacting. The Norwegian state oil company, Equinor, said it has decided to raise the level of preparedness in Norway, according to Norwegian broadcaster NRK. The alert was raised overnight and applies to all of Equinor’s facilities.

Norway isn't a member of the EU, but it is a major producer of offshore oil and gas. Its energy exports have surged as European countries scramble to find alternatives to Russian energy supplies.

The Norwegian government decided on Tuesday to boost security around its energy infrastructure, land facilities and installations on the Norwegian continental shelf after reports of an increase in unidentified drone flights.

The leaks in the gas pipelines were spotted off the Danish Baltic Sea island of Bornholm. Danish Prime Minister Mette Frederiksen has said that “it is the authorities’ clear assessment that these are deliberate actions — not accidents.”

But she said “there is no information indicating who could be behind it.” Frederiksen rejected the suggestion that the incident was an attack on Denmark, saying the leaks occurred in international waters.

Denmark's defense minister, Morten Bødskov, met Wednesday with NATO Secretary-General Jens Stoltenberg to discuss the incidents. The Danish defense ministry said it also believes “that the violations occurred as a result of a deliberate act.”