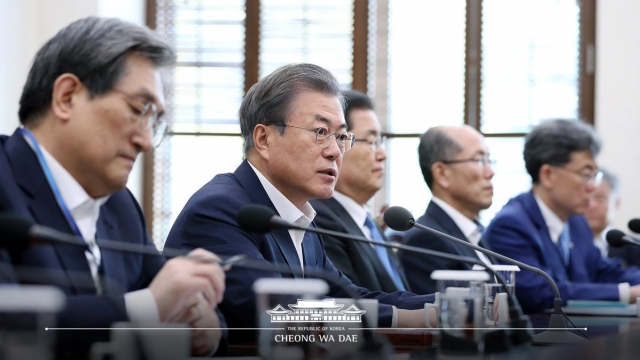 SMS
Moon Jae-In Says He's Willing To Be Part Of Another Inter-Korea Summit
By Katie Cammarata
By Katie Cammarata
April 15, 2019
The South Korean president said he wants to help with nuclear negotiations between North Korea and the U.S.
SHOW TRANSCRIPT

South Korean President Moon Jae-in said he's willing to participate in another inter-Korea summit to help with nuclear negotiations between North Korea and the U.S.

Moon made the comments during a meeting with his senior advisers Monday. He said he wanted to have a "concrete and substantial discussion" with the North that produces better results than the two North Korea-U.S. summits.

In a speech Friday, North Korean leader Kim Jong-un gave the U.S. until the end of the year to decide if the country wanted to hold a third summit. He added that it would be under the condition that the U.S. had the "right attitude" and found "a methodology that can be shared with [North Korea.]"

President Donald Trump responded the next day, saying a third summit would be "good in that we fully understand where we each stand."

South Korea's president has said one of his country's priorities is to keep U.S. and North Korean negotiations on track.