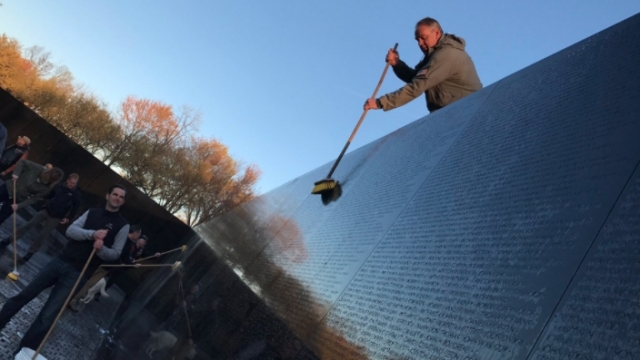 Every weekend in the spring and summer, volunteers gather in Washington, D.C., to help clean the Vietnam Veterans Memorial.

And this week, Interior Secretary Ryan Zinke was one of those volunteers.

According to the Independent Journal Review, Zinke and members of the Rolling Thunder motorcycle advocacy group met at around 6 a.m. local time to wash the memorial.

When Zinke was asked why he decided to help out, his answer was simple.

He told the IJR, "Rolling Thunder is here to wash the wall. I'm here to help them."

Zinke has gone out of his way to show his appreciation for Vietnam veterans in the past.

Last year as a congressman in Montana, he traveled around the state to honor vets with a pin commemorating the 50th anniversary of the end of the war.

It's not uncommon for politicians to pitch in on volunteer projects like this.

In 2010, then-Interior Secretary Ken Salazar surprised volunteers at the Big Branch Marsh National Wildlife Refuge by showing up to help out.