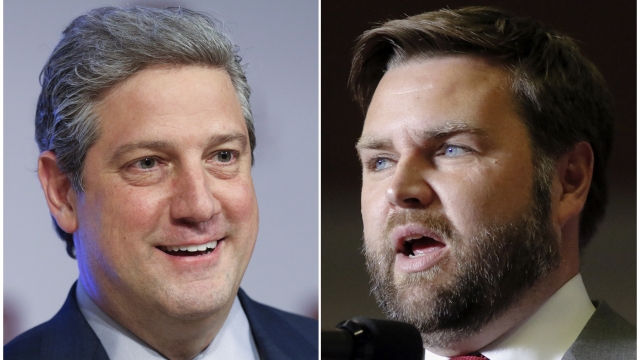 Democratic U.S. Rep. Tim Ryan and Republican JD Vance deflected accusations of being political lapdogs to their parties Monday, as they met in a heated second debate for Ohio's open U.S. Senate seat.

Vance used the face-off hosted by Youngstown’s WFMJ-TV to push back against a bit of Ryan name-calling from their first debate last week.

Vance, a venture capitalist and author of “Hillbilly Elegy,” said former President Donald Trump was only making a joking reference to a newspaper article when he said Vance had been “kissing my a--” for an endorsement. Vance said everyone at the political rally where Trump made the remark understood it that way.

Ryan said he stood up to his own party when he once challenged Pelosi for the speakership, and has also supported bipartisan bills alongside retiring GOP Sen. Rob Portman, who has endorsed Vance to take over his seat.

The Ohio Senate race is an expensive one — with $65 million spent in the general election according to AdImpact.

To questions on immigration, police violence and opioid addiction, Vance returned frequently to the topic of the U.S. border with Mexico, which he said Democrats like Ryan have done too little to protect.

“You have got to close the border," he said. “You've got to finish the wall and you've got to make it so that these drug cartels are not able to use the U.S. southern border as a drug trafficking center.”

Ryan said he has disagreed with President Biden on relaxing certain border regulations and started the Border Technology Caucus to explore how to use technology to keep the boundary secure. He said it would be “a big mistake” to send Vance to Washington given the record of his anti-addiction nonprofit.

Vance said Ryan's words didn't match his record. “You cannot pretend to be a defender of border security when you voted against border wall funding multiple times.”

On abortion, Vance said that he would vote for the national abortion ban at 15 weeks introduced by Republican U.S. Sen. Lindsey Graham, but also believes in certain exceptions — such that the 10-year-old Ohio rape victim could have gotten her abortion in the state, for example. He did not explicitly say he supports a rape exception, rather implied that her case probably fell under the exception for protecting the life of the pregnant person.

He said the issue is too complex for him to name all the exceptions he might support on a debate stage.

“I think it's totally reasonable to say you cannot abort a baby, especially for elective reasons, after 15 weeks of gestation,” he said. “No civilized country allows it. I don't want the United States to be an exception.” Current Ohio law allows abortions up to 20 weeks' gestation.

Ryan said he would vote to codify the abortion rights previously protected under Roe v. Wade, which generally allowed abortions up under viability, and finds Graham's bill extreme.

“They're not happy with people having to go to Illinois. They want people to have to have a passport and have to go to Canada,” he said. “Largest governmental overreach in the history of our lifetime." he said, calling Vance "not a guy who's ready to protect the rights of women."

On police accountability, Vance touted his endorsement by the Ohio Fraternal Order of Police and said he believes adequate protections are in place to root out and discipline bad cops. He said an effort supported by Ryan to strip police of qualified immunity “is why we have the violent crime on our streets right now.”

Ryan said Vance's position didn't square with his failure to take seriously the Jan. 6 attack on the U.S. Capitol, where members of the Capitol Police were injured or died.

Vance said the Jan. 6 Committee investigating the siege “has shown from the very beginning that it's not interested in the truth, that it's interested in a political hit job" against Trump. He accused Ryan, Democrats and the media of being obsessed with the issue as average Ohioans worry about paying for groceries.

Ryan responded by saying, “If a group of people storm the Capitol while we’re trying to file the paperwork for an election, and they’re trying to prevent that from happening and they want to kill the vice president, like, that needs to be looked into.