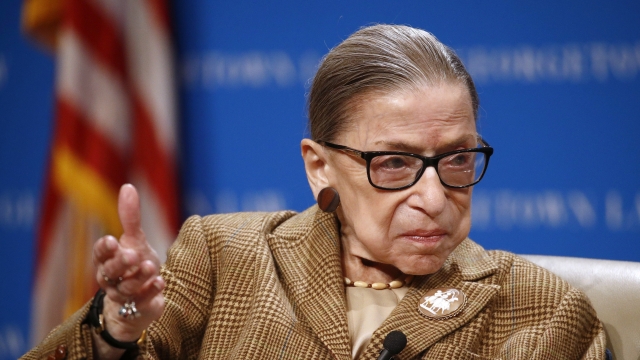 SMS
Ruth Bader Ginsburg Recovering In Hospital After Infection Treatment
By Bailey Vogt
By Bailey Vogt
May 6, 2020
The court said doctors found a "gallstone that had migrated to her cystic duct, blocking it and causing an infection."
SHOW TRANSCRIPT

The Supreme Court said Associate Justice Ruth Bader Ginsburg is "resting comfortably" after she was admitted to the hospital Tuesday for an infection.

The court said in a press release that Ginsburg went through tests at a Washington hospital where doctors found a "gallstone that had migrated to her cystic duct, blocking it and causing an infection."

The 87-year-old justice underwent a non-surgical treatment and is now recovering in a Baltimore hospital, where she is expected to stay for "a day or two."

Ginsburg, who has battled cancer four times, has had several health scares and hospitalizations in recent years. That's drawn concern from liberals as far-reaching cases come before a court that has added more conservative justices.

Despite being hospitalized, Ginsburg asked questions Tuesday over the phone as the court heard arguments remotely because of the coronavirus. She is expected to call in again on Wednesday.