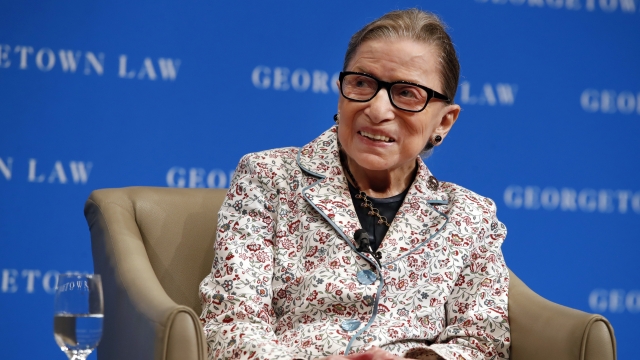 Jay Strubberg: "The late Justice Ruth Bader Ginsburg will lie in state today at the U.S. Capitol. Newsy's Katherine Biek joins me now to talk about the tributes. Katherine, what does it mean to lie in state? And why is this distinction especially significant for Ginsburg?"

Katherine Biek: "Well, the tradition of lying in state is mostly reserved for government officials, Jay. And it refers to the short amount of time those officials' caskets are displayed at either the U.S. Capitol or another government building at the state level. Ginsburg will not only be the first woman to lie in state, she's also the first Jewish American to do so. And it's a fitting tribute for a woman who was considered a trailblazer by so many."

Laura French: "We owe her a tremendous debt in terms of what she did to pursue equal rights for men and women, gay and lesbian individuals, really every single American."

Biek: "Now, before Ginsburg, only 34 men have been honored at the Capitol in this way since 1852. Many have been U.S. presidents, congressional lawmakers, soldiers and military commanders. The last person so honored was the late Georgia congressman and civil rights icon John Lewis, who passed away back in July. And the only other Supreme Court justice to lie in state has been William Howard Taft, who served as the chief justice after he served one term as president. Now, if you remember, Rosa Parks was honored at the Capital following her death in 2005. But since she was a private citizen and not a government of official, she was considered to be lying in honor and not lying in state Jay."

Strubberg: "Yeah, Katherine, it really just speaks to Ginsburg's impact not just on the legal system but the country as a whole. This titan in the push for gender equality. Katherine Biek. Thank you."