Ruth Bader Ginsburg Is In The Hospital With A Possible Infection 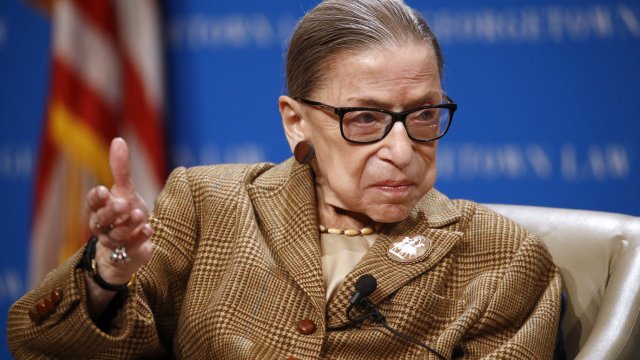 She was first evaluated Monday night at a Washington, D.C., hospital after experiencing fever and chills.

Supreme Court Justice Ruth Bader Ginsburg is in the hospital with a possible infection.

The high court released a statement Tuesday saying Ginsburg is at Johns Hopkins in Baltimore. She was first evaluated Monday night at a Washington, D.C., hospital after experiencing fever and chills.

Ginsburg underwent a procedure Tuesday afternoon at Johns Hopkins to clean out a bile duct stent that was placed last August, when she was treated for a cancerous tumor on her pancreas.

At 87, Ginsburg is the oldest member of the Supreme Court, and she's had some health scares in recent years. In 2009, she underwent treatment for early-stage pancreatic cancer. And in December 2018, she underwent surgery to remove two cancerous nodules from her left lung. That surgery caused her to miss her first scheduled public argument session in 25 years.

Ginsburg was appointed in 1993 by President Bill Clinton. She is the second woman ever appointed to the Supreme Court.

Ginsburg is reportedly resting comfortably and will stay in the hospital for a few days receiving antibiotics.