Ruth Bader Ginsburg Has Hired Clerks To Last Through 2020 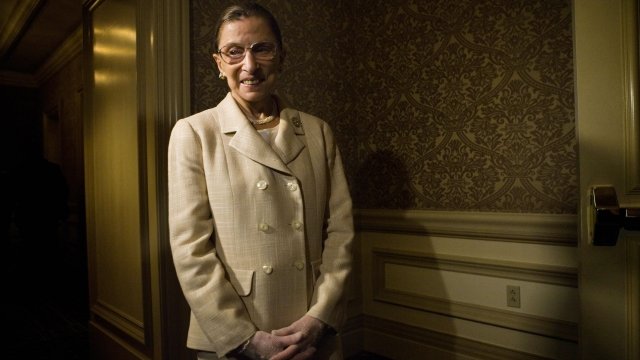 SMS
Ruth Bader Ginsburg Has Hired Clerks To Last Through 2020
By Casey Mendoza
By Casey Mendoza
January 9, 2018
The Supreme Court justice has been very vocal about her plans to not retire just yet.
SHOW TRANSCRIPT

On Monday, the Supreme Court public information office confirmed to CNN that Ginsburg hired a full slate of law clerks to serve through at least 2020.

This hiring is consistent with the justice's past answers on retirement. Back in October, she said, "As long as I can do the job full steam, I will do it."

Trump's past statements, however, don't seem to echo Ginsburg's confidence.

Before gaining control of the White House, he tweeted, "Her mind is shot - resign!" Months later, sources told Axios that Trump thinks he'll appoint four new Supreme Court justices by the end of his first term.

Trump reportedly cited some justices' health for his prediction, but Ginsburg is making sure she stays fit for office. Despite multiple bouts with cancer, the justice gets regular checkups, exercises daily and even lifts weights.