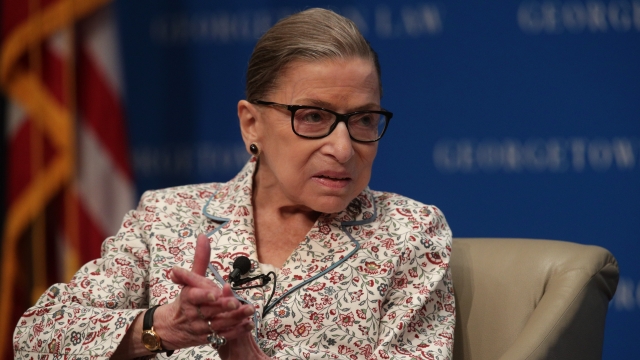 On Friday, the court said she was treated for pancreatic cancer in New York City this month.

The court said, "The tumor was treated definitively and there is no evidence of disease elsewhere in the body." It also said "no further treatment is needed at this time."

This isn't her first run-in with cancer. Doctors successfully treated her for colorectal cancer in 1999. In 2009, she underwent treatment for early-stage pancreatic cancer. And in December, the 86-year-old underwent surgery to remove two cancerous nodules from her left lung.

That surgery caused her to miss the court's first oral arguments this year. It was reportedly the first time she's missed a scheduled public argument session in 25 years. She returned to the Supreme Court in February.

Ginsburg is the oldest Supreme Court justice and took the bench in 1993. She's built a legacy for herself as a champion for women's rights. Her health often makes headlines — at least partially because Senate Majority Leader Mitch McConnell has said that if she leaves the court before 2020, Republicans will rush to replace her. That would pretty much guarantee a majority-conservative bench for decades.

Ginsburg reportedly has no plans to step down from the bench anytime soon.