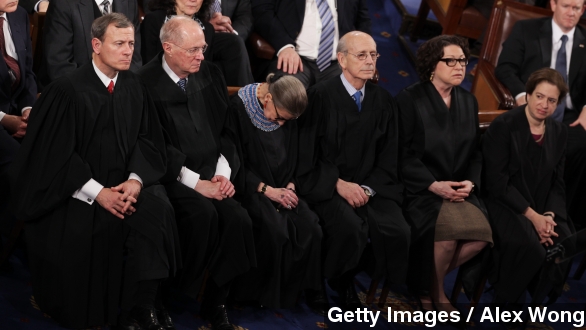 SMS
Ruth Bader Ginsburg Admits She Drank Before SOTU
By Cliff Judy
By Cliff Judy
February 13, 2015
The 81-year-old Supreme Court justice told a panel she and other justices had dinner and drinks before Obama's speech, leading to her falling asleep.
SHOW TRANSCRIPT

Take a back seat, hilarious Ruth Bader Ginsburg memes. The tidbit the 81-year-old Supreme Court justice has spilled should create an entirely new buzz about her.

"I've seen something like gay marriage go from a wedge issue used to drive us apart to a story of freedom," President Barack Obama said during his State of the Union address. (Video via Fox News)

So, that's Ginsburg front and center at President Barack Obama's State of the Union address three weeks ago. Seemingly dozing off.

And the reason she couldn't make it all the way through Obama's cornerstone speech of the year is even better than the act itself. On Thursday, during a panel at George Washington University hosted by NPR, she explained. (Video via The White House)

"At least, I wasn't 100 percent sober because before we went to the State of the Union, we had dinner together," Gingburg told the crowd. (Video via CNN)

Yes, the liberal lioness sitting on the nation's highest court the last 22 years was a little tipsy on wine. You have to admire her honesty.

In noting the tradition of justices not standing during the president's speech to remain impartial, she told the panel, "The audience for the most part is awake because they're bobbing up and down all the time, and we sit there stone-faced, sober judges."

That's when she admitted she wasn't sober. So far, no one's truly taking Ginsburg to task for having a drink or two. Even Fox News apologized for her — while taking a dig at Obama.

"And, by the way, she would not be the only non-sober person in that room. Just saying," Steve Doocy said on Friday morning's "Fox and Friends."

"Whatever you need to do to get through that, I guess," Elisabeth Hasselbeck said.

Not that Ginsburg need apologize to anyone. She is a Supreme Court justice for as long as she so chooses, after all. But maybe next year, Justice Ginsburg ... yeah, there you go. (Video via MAKERS)