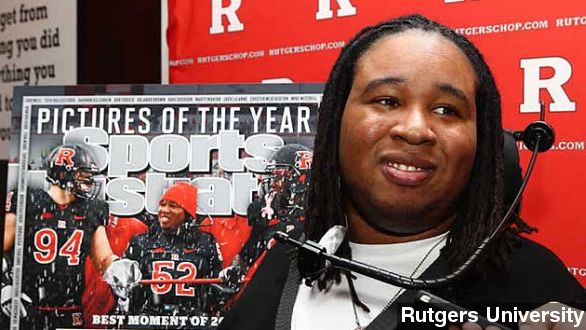 By Jamal Andress
May 6, 2014
After protests against Condoleezza Rice and one or two "miscommunications," the inspirational speaker will address Rutgers' 2014 graduating class.
SHOW TRANSCRIPT

After going through three possible speakers in less than three days and making national headlines, it seems Rutgers University finally has a commencement speaker that everyone can agree on.

According to a statement by Rutgers University's President, Eric LeGrand will be the commencement speaker for the 2014 graduating class. (Via SB Nation)

"Eric holds a special place in the hearts of the Class of 2014 and the entire university community. We are thrilled that he will be joining us on stage to make this special occasion even more memorable."

And while things are settled now, it was a long and somewhat controversial road for Rutgers.

Condoleezza Rice was the original pick by Rutgers to be the commencement speaker, but protests from students and some faculty members over her involvement in the Iraq War pushed her to decline the invitation.

She wrote on Facebook, "I understand and embrace the purpose of the commencement ceremony and I am simply unwilling to detract from it in any way."

Then, according to USA Today, Rutgers offered the commencement speech to LeGrand Saturday only to withdraw the offer Monday for what LeGrand called "political reasons."

Eric LeGrand was a football player at Rutgers University, but an injury in 2010 paralyzed him. But he's since regained movement in his shoulders and hopes to one day walk again. LeGrand has been profiled by ESPN, was signed to a symbolic NFL contract and now speaks around the country.

So when LeGrand informed his thousands of Twitter followers of how he was and then wasn't the commencement speaker, Rutgers had yet another PR fire to put out.

That's when Rutgers President Robert Barchi stepped in, calling the whole thing a "miscommunication" and saying Rutgers is "thrilled" to have LeGrand.

But CBS notes, "The school's amendment only came after widespread disapproval on social media."

Despite all the confusion, LeGrand has been classy throughout, telling a New Jersey Star-Ledger reporter, "I better leave one hell of a mark after all this."