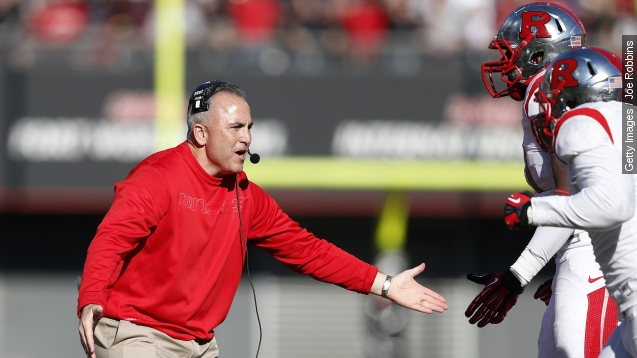 Rutgers head football coach Kyle Flood has been suspended by the school for three games and fined $50,000, the latest in a string of suspensions and dismissals at the New Jersey school.

Flood's suspension followed a month-long university investigation that revealed he had emailed and met with a professor about cornerback Nadir Barnwell's eligibility, even though it's against university policy.

News of that investigation broke about three weeks ago and since then, Barnwell became one of six players recently booted from the squad for a bevy of reasons.

On Sept. 3, four Scarlet Knights players, including Barnwell, were arrested and charged with assault following an attack on a group of students, and another was charged with robbery. All five of those players were soon dismissed from the team.

A sixth player was arrested — and dismissed — soon after following an arrest for armed robbery. Another player, wide receiver Leonte Carroo, was charged with assault following a Saturday incident where authorities say he smashed a woman's head onto the concrete outside Rutgers' football stadium.

All in all, 11 different Rutgers players have been arrested since Flood became head coach just three years ago, something Flood acknowledged Monday he shoulders some responsibility for.

"As the head coach, everything ultimately reflects on you," Flood said at a press conference. "That's part of the job. If you shy away from that you probably shouldn't do the job."

Flood's suspension doesn't have anything to do with arrests, though, just the academic tampering. A reporter for NJ.com told ESPN the school, and its president Robert Barchi, take the violation very seriously. (Video via Scarlet Nation)

"Much of the reason why Rutgers entered the Big Ten was because of its academic reputation, and in Dr. Barchi's view this was something that violated that academic integrity," reporter Keith Sargeant told Outside the Lines Wednesday.

Flood released a statement Wednesday afternoon saying he plans to continue his efforts to help his players succeed in the classroom, but will make sure to adhere to university policies moving forward.

This video includes images from Getty Images and music from Chris Zabriske / CC BY 4.0.