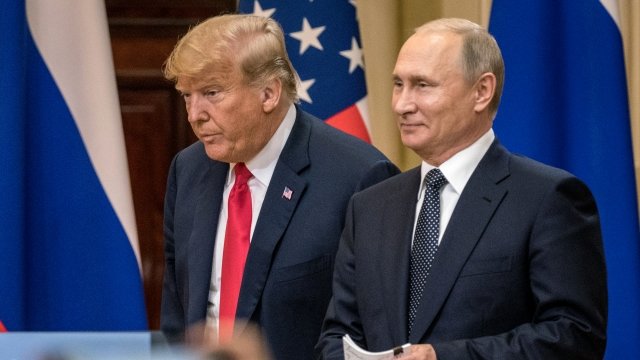 Most Russians don't have a particularly good opinion of U.S. President Donald Trump, according to state-run polls.

Most Americans don't have a particularly fond view of Russian President Vladimir Putin. And it turns out most Russians don't think particularly highly of our president either.

Ahead of Trump's summit with Putin in Helsinki, Russia's state-run polling agency said 71 percent of Russians had an unfavorable view of Trump, with "self-centered" and "dangerous" among the top descriptors for the U.S. president.

That's because, for all Trump's rhetoric about wanting better relations with Russia, he hasn't done much to improve things. Fresh sanctions, diplomatic expulsions, and indictments from the ongoing probe into Russian electoral interference have all served to keep things chilly between the U.S. and Russia.

There was some initial optimism that Trump would represent a fresh start for the U.S. and Russia — Russia's state-run media greeted Trump's election with a wave of positive coverage, though that subsided quickly.

The indictment alleges the Russians aimed to influence the 2016 presidential election.

According to the independent pollster Levada Center, Russian unfavorable views of the U.S. dropped after Trump won office, but have since climbed back to where things were before the election.

Trump has maintained he still wants better relations with Russia and Putin: he praised Putin as a "good competitor" during their summit on Monday.

But most Russians don't see things changing any time soon. A recent state-run poll found over half of Russian respondents expected no substantial relationship change from the Helsinki summit.