Russians Scramble To Banks As Their Currency Crumbles 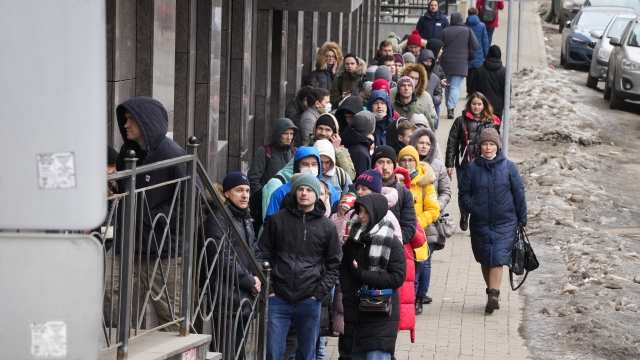 Western sanctions against Russia are having a dramatic impact.

One ruble is now worth less than one U.S. cent. A week ago, before the invasion, it was at .80 cents.

"Putin wants much more than a war-torn piece of Ukrainian land and people living there. What stops him is only our unity and resolve," Ukrainian Foreign Minister Dmytro Kuleba said.

The sanctions are impacting Russian citizens. As the ruble's value plummets, inflation in Russia will soar.

People are scrambling to pull their money out of banks before the banks run out of money,  unable to access foreign currency. There are reports that credit cards are no longer accepted for many with international bank accounts.

"He and his government are being treated like the pariahs that they are by the entire world community," Rep. Brendan Boyle said.

Putin had been stockpiling money for nearly the past decade. He's had an estimated $600 billion worth kept in reserves, presumably to weather a storm like this.

But the Treasury Department issued new sanctions Monday — the most significant to date — to restrict Russia's ability to access much of that money.

There are effects in the U.S., too 5,000 miles way. On Wall Street, it was another sell-off Monday, except for some notable exceptions. Defense stocks like Lockheed Martin and cybersecurity stocks like Crowdstrikerose. But the top concern remains oil.

"The global oil supply is still kind of tight and then you have this, this uncertainty about what's gonna happen with Russia and Ukraine and that throws a lot of other uncertainty into the mix," AAA Spokesperson Andrew Gross said.

While only a small fraction of U.S. oil comes from Russia, it's a major supplier around the world.

There are fears Russia could halt natural gas exports out of spite.

"If we were to see Russia potentially withhold energy exports, the question would be who could make up for that?" RBC Capital Markets' Helima Croft asked.

Even Switzerland is ditching its normal neutrality, to join the condemnation of Russia.

It is freezing Russian assets, which is significant because Switzerland is a favorite destination for the Russian elite to bank their money.