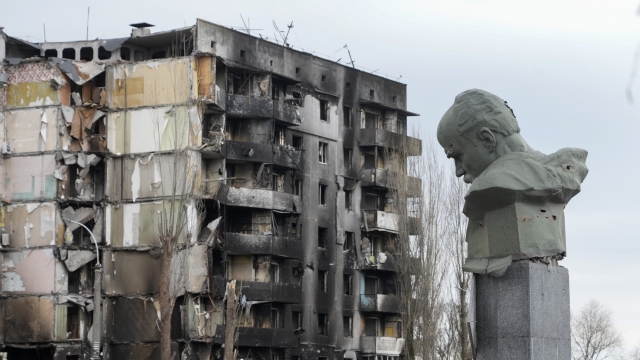 In the devastated suburb that Ukraine's interior minister calls "one of the biggest tragedies in Ukraine," many who died lived along a single doomed street, Centralna Street.

The Russians killed hundreds of civilians in Borodyanka. Forty-one of them were pulled from the rubble of just a few blocks on Centralna Street.

"Airstrikes on civilians in residential areas are war crimes," he said.

As they advanced on the capitol of Kyiv, Putin's army cleared the way by attacking Borodyanka. It's about 40 miles east of downtown and lies along the highway. Through airstrikes, they destroyed at least a dozen residential apartments.

The Russian bombs tore through the center of the five-to-ten-story tall buildings, once home to thousands, including Vladyslav Pichuhin.

From the window of his apartment he shot a video as a column of Russian tanks rolled down Centralna Street on the fourth day of the invasion. He knew he had to escape.

"We understood it was too dangerous to stay in the apartment," Pichuhin said. "So we moved to a garage nearby where we had good shelter."

Two days later, he woke up to the sound of explosions. He and his girlfriend got in their car to escape Borodyanka. When they drove past their apartment building "there was just clouds of dust and ruins... It was horrible," he says.

He is testimony to the horrifying randomness of death on this street while some from his building survived. Neighbors on the other side of his wall — a mother, father and 12-year-old child — died in the wreckage of their home.

Others, he says, were buried alive in the basements they thought would shelter them.

The Russians shot or shelled anyone trying to rescue the injured, residents say.

But a few days after the bombings, a woman who lived nearby braved Russian snipers to walk with her dogs near the wreckage. We met her on Centralna Street and she told us how people trapped underneath the rubble cried out to her. They had been without food and water for three days.

She says that for the rest of the Russian occupation she brought them food and water, passing it through small openings. No one knows if they survived.

On the other side of Centralna Street, Valentin Moiseenko, the photographer for Borodyanka's cultural office, ventured out in the days before the bombings, capturing the first tanks on Centralna Street.

"I suppose that this resistance prompted the Russians to make a decision to destroy Borodyanka as much as they could," Moiseenko said.

"A huge column of tanks and armored vehicles moved through Centralna Street. They struck everything. Residential areas. Private houses. People on the street," Moiseenko continued.

And then Russian soldiers occupied his building. He showed Newsy a bullet hole on the frame of his door. They ransacked and looted from his neighbors.

Moiseenko's balcony looks out on a park and the statue of Taras Shevchenko — the Ukrainian national poet. The Russians put a bullet through the head of Shevchenko, execution style.

The poet, like the destroyed buildings he faces, are now monuments to the horror of Russian atrocities in their battle for Kyiv.