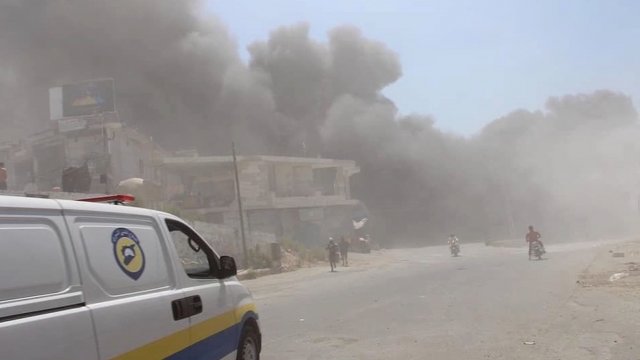 According to Al Jazeera, at least 24 raids were carried out around the Idlib province Tuesday morning, lasting several hours and killing "at least 10 civilians."

The airstrikes were carried out ahead of an already planned government offensive to retake the region — Syria's government had moved combat helicopters closer to Idlib weeks beforehand. A Kremlin spokesperson said Idlib was "a hornets' nest of terrorists" and "must be sorted out."

President Trump tweeted a warning Monday, saying Syrian President Bashar al-Assad "must not recklessly attack Idlib Province" and that "hundreds of thousands of people could be killed." This came a few days after Secretary of State Mike Pompeo tweeted similar sentiments, saying the U.S. would consider such a move "an escalation of an already dangerous conflict."

Idlib is home to nearly 3 million people, many of them refugees from other cities taken over by Assad's regime. The U.N. Security Council will hold a meeting Friday to go over what's happening in the Syrian province.