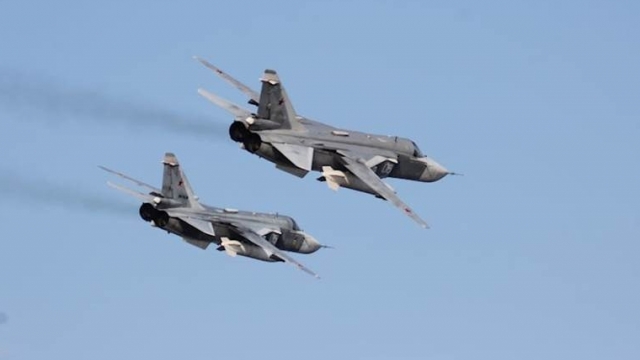 SMS
Russian Planes Fly 'Dangerously Close' To US Warship
By Eugene Daniels
By Eugene Daniels
April 13, 2016
According to The Washington Post, Russia has flown planes close to different ships in the Baltic Sea over the last two years.
SHOW TRANSCRIPT

The first incident happened April 11 while the USS Donald Cook was conducting landing drills and refueling an allied military helicopter. The Russian jets returned the following day, this time preceded by a Russian helicopter that circled at a low altitude around the ship.

The government says the aircraft didn't respond to radio advisories in both English and Russian.

U.S. European Command says the actions could escalate tensions "between countries, and could result in a miscalculation or accident that could cause serious injury or death."

And the White House says the incidents are inconsistent with acceptable behavior in international waters. In a briefing, Press Secretary Josh Earnest said, "There have been repeated incidents over the last year where the Russian military, including Russian military aircraft, have come close enough to each other or have come close enough to other air and sea traffic to raise serious safety concerns."

According to The Washington Post, Russia has flown planes close to different ships in this same region over the last two years. For now, the U.S. says it's using diplomatic channels to address the incidents and the U.S. Navy is conducting a review.

This video includes images from U.S. Navy and clips from U.S. European Command.