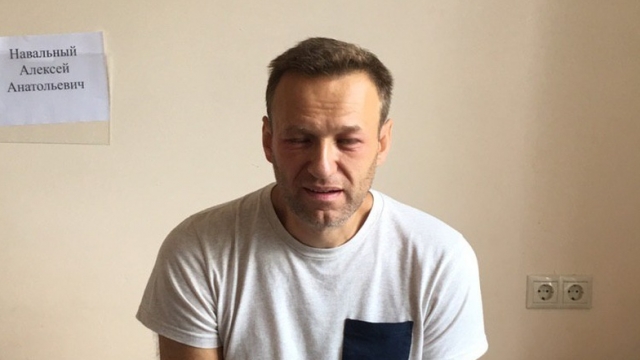 Russian opposition leader Alexei Navalny was hospitalized over the weekend after reportedly suffering from an acute allergic reaction. He was in detainment at the time for calling for an unsanctioned protest, and his personal doctor said she believes he was exposed to a toxic agent.

Navalny was sent to the hospital Sunday for a swollen face, rashes and eye issues.

In a blog post, Navalny said he has never had an allergic reaction before. He said his cellmates noticed a rash on his neck on Saturday, and by Sunday morning his face felt like it was burning and his eyes were swollen. Navalny said he feared he may have been poisoned like other political activists have been.

Russia has a long history of alleged poisonings of political opponents and activists. The most recent suspected poisoning took place last March when former Russian spy Sergei Skripal and his daughter came in contact with a nerve agent while in the U.K. Two Russian nationals are accused of poisoning them.

An ophthalmologist in Russia who says she's one of Navalny's longtime doctors said she and another physician were not given full access to Navalny in the hospital, but after briefly seeing him, she believes "this is the result of the damaging effects of uncertain chemicals." She urged law enforcement to take samples of Navalny's skin, hair and detention cell for testing.

Navalny was discharged from the hospital Monday and returned to detainment.

The pro-democracy protest still took place on Saturday in Moscow. Protesters were speaking out over opposition candidates being left off the ballot for city council elections. Video of the protests shows police using excessive force on protesters. More than 1,000 people were arrested.