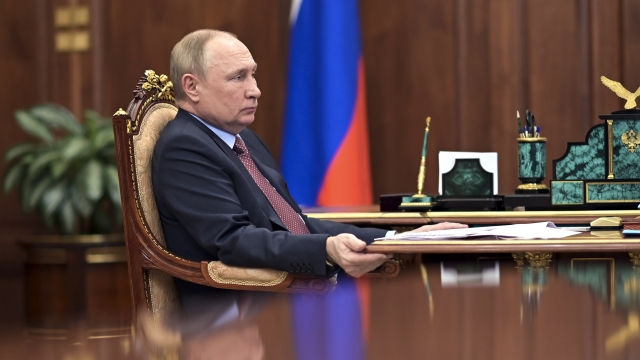 SMS
Russian Officials: Won't Pause Military Operations For Peace Talks
By Jason Bellini
By Jason Bellini
April 11, 2022
Thousands of troops and supplies are getting into position for an assault on the Donbas region in Eastern Ukraine.

As Ukraine still reels from Friday's deadly attack at the Kramatorsk train station, the country's president is warning it is just the opening salvo of the war's next wave.

"Russia is preparing another offensive, hoping to break our national resistance," President Zelenskyy said. "The occupiers concentrated tens of thousands of soldiers and a huge amount of equipment to try and strike again."

New satellite images support President Zelenskyy's warning. They show a long convoy of Russian vehicles heading to the eastern region. Hundreds of them, according to a senior Pentagon official, including infantry and helicopter support units. It indicates a new phase of the war is likely to begin there and soon.

The convoy is east of Kharkiv, a scene of devastation that foretells the scorched earth tactics that other cities, deeper into the country, now fear.

Residential buildings mercilessly destroyed, like one hit on Saturday, with more than 100 people inside.

"People can evacuate and everybody who wants to has this opportunity, but many people don't want to evacuate. They were born here, they've had their lives here and they want to continue living here. So, a lot of people are not evacuating," Kharkiv Mayor Ihor Terekhov said.

Hopes of averting even more widespread death and destruction are fading.

"I have no optimistic impression that I can bring you from this conversation with President Putin. The offensive is obviously being massively prepared," he said.

And Russia's foreign minister, Sergei Lavrov, said that Russia will not pause its military operations in Ukraine for the next round of peace talks. He accused the west of trying to derail the negotiations by raising war crimes allegations against Russian troops.

The allegations from U.N. officials and human rights groups paint a horrific picture of Russian atrocities.

"We know and see and we want you to hear our voices that violence and rape is used now as a weapon of war by Russian invaders in Ukraine,"  said Kateryna Cherepakha, director of rights group La Strada-Ukraine.

The evidence is being collected. Forensic experts are exhuming bodies at mass graves in the city of Bucha, outside Kyiv. As some relatives of victims look on, specially designated prosecutors try to determine how the victims — mostly civilians — died during the city's occupation by Russian troops.