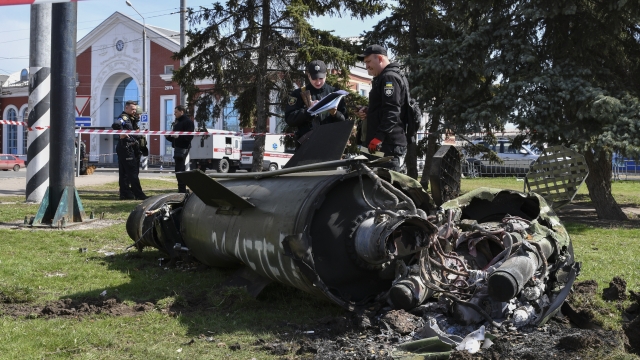 When a Russian missile struck, the train station in Kramatorsk was packed with people. At least 4,000 civilians were told to evacuate to safety ahead of the advancing Russian army.

President  Volodymyr Zelenskyy and other Ukrainian leaders say this was yet another example of Russia's military deliberately targeting civilians — a charge Russia denies.

"Actually, what we see in Kramatorsk, it's the strategy of how [the] Russian army and Russian troops do their war," Ukraine Prosecutor General Iryna Venediktova said. "They just kill civilians to scare them and not let them evacuate themselves and their families. They want to scare and cause panic in Ukrainian cities for capitulation."

After failing to take Ukraine's capital and withdrawing from northern Ukraine, Russian forces are regrouping and taking aim at cities closer to their own country's border, and areas already under their control.

Kramatorsk is among the cities the world's like to be hearing much about in the coming weeks, as Russia shifts its focus towards taking control of cities in the east.

Russia's expected, according to a senior U.S. Defense official, to use the recently seized city of Izyum as a launching off point for expanding deeper into the east.

In the southeast, Russia's battling to declare victory in Mariupol, which would free up resources for attacking Mykolaiv — an important city for controlling the Black Sea.

The coming weeks could prove critical. Ukrainian reinforcements are moving east to try to deny Russia the victories it's seeking. All are well aware that just a few weeks away, on May 9, is Russia's Victory Day, honoring its triumphs over Germany in World War II.

Many suspect President Vladimir Putin is hoping to use the occasion to celebrate a victorious campaign of taking over Ukraine's Russian-speaking regions.

On the Ukrainian side, the fear is that to accomplish that in such short order, Russian forces will use the scorched-earth tactics that have destroyed large swaths of Kharkiv and most of Mariupol.

Add now to the places of notorious tragedy, Kramatorsk, where it may now be too late to safely escape.