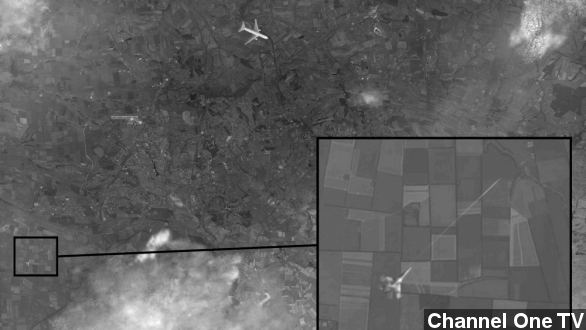 Vladimir Putin is getting the cold shoulder in Australia at the annual G20 summit this weekend. Russia's involvement in the Ukraine crisis, and their alleged role in the downing of Flight MH17, has made the country an international pariah in recent months.

AUSTRALIAN PRIME MINISTER TONY ABBOTT VIA ABC: "Look, I am going to shirtfront Mr. Putin. ... Australians were murdered. They were murdered by Russian-backed rebels using Russian equipment. We are very unhappy about this."

So perhaps it shouldn't come as a surprise that state-run Russian broadcaster Channel One TV released what it called "sensational new evidence" on the eve of the summit, attempting to cast the blame for the lethal crash on the Ukrainian military.

Channel One's report touted this photo, which they claimed to be a satellite image leaked by an aviation expert from a "foreign intelligence service." It supposedly shows a Ukrainian fighter jet firing on a commercial airliner over Ukrainian airspace.

If true, the image would contradict Western claims that MH17 was shot down by Russian anti-aircraft artillery. The story was quickly picked up by Russian media outlets.

And Channel One might have gotten away with it too, if it wasn't for those meddling bloggers and their pesky Internet.

Russian web users were the first ones to start poking holes in the image, noting it actually popped up in a forum one month before Channel One's "scoop." Observers also noted other discrepancies with the image — the plane's flight trajectory was off, the fighter jet silhouette didn't match Ukraine's military planes, and the airliner's logo was misplaced.

Citizen journalists managed to track down some of the images used to generate the "authentic" satellite photo, compiled here by blogger Brown Moses' journalism site Bellingcat. The landscape is a satellite imagery composite of Google Maps and Yandex. And Flight MH17 looks an awful lot like this promotional image of a Boeing 767.

Just to finish things off, Buzzfeed got in touch with Channel One's supposed source of the photo. He confirmed to the outlet that he found the image on an Internet forum and emailed it to another amateur investigator, without verifying its authenticity.

He also told Buzzfeed, "I am quite unhappy that my bona fide informal attempt possibly became a source of yet another battle in a media war. ... Those folks are either desperate or totally unprofessional."

Once disproved, the image became the target for Internet mockery. Global Voices collected some of the best Russian takes on the forgery, which include Nazi UFOs and Ukrainian embroidery.

And a triumphant Forbes writer declares the faked photo proof that, "for all of the outcry it has attracted and for all of the money spent on creating it, Russian propaganda remains crude and ineffective."

But while it's easy to scoff at clumsy Russian propaganda, The Interpreter notes the Kremlin's disinformation is often effective in Eastern Europe, where people are more receptive to Russia's message.

And thanks to a recent crackdown in Russia on foreign-owned media, it's only getting more and more likely that people under Russia's influence will be more inclined to believe the Kremlin's side of the story — no matter how poorly photoshopped it might be.