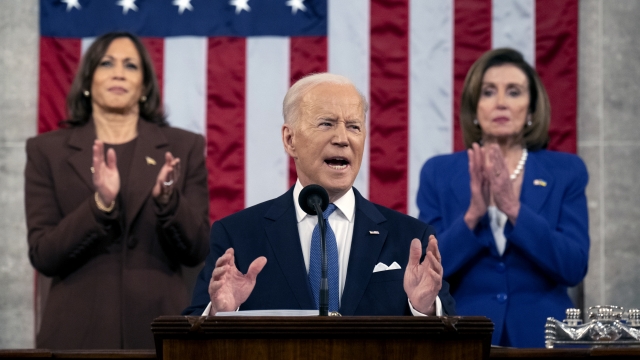 Not long after winding down 20 years of war, President Joe Biden now finds the United States entrenched in a conflict in Ukraine, even without sending in U.S. troops, that could have a more far-reaching effect on a larger cross section of Americans than Afghanistan or Iraq ever did.

Fighting in Afghanistan and Iraq cost the lives of more than 6,900 U.S. troops and more than 7,500 U.S. contractors, and American spending topped $2.3 trillion. But those wars had little impact on how the vast majority of Americans lived their daily lives. It was a 20-year period where people experienced both the Great Recession and the longest U.S. economic expansion, touchstones that were little influenced by the two grinding conflicts.

Now, five months after the end of the war in Afghanistan, the longest in U.S. history, Americans are entering complicated terrain with the Russian invasion in Ukraine. While President Biden promises there will be no American forces on the ground there, he acknowledged the war waged by Russian President Vladimir Putin could have real impact on Americans' pocketbooks.

"A Russian dictator, invading a foreign country, has costs around the world," President Biden told Americans in his State of the Union address on Tuesday night.

The financial tumult of the most significant military campaign in Europe since World War II is already being felt.

This past week saw U.S. crude oil prices surge about 13% to roughly $113 per barrel and the cost of natural gas reached a record in Europe as the war stoked market fears about a supply shock.

Key stock market indices, volatile for weeks, saw further losses as French President Emmanuel Macron warned "the worst is yet to come" after a lengthy phone call on Thursday with Putin.

Yet, in Washington -- as well as in European capitals -- there are signs of growing resolve to confront Putin and of a willingness to take on some economic pain in the process.

It's a markedly different tone than in the aftermath of the 9/11 attacks that spurred the Afghanistan War. Then-President George W. Bush implored Americans then to "stand against terror by going back to work" and suggested Americans "get down to Disney World" as his administration tried to restore faith in the U.S. airline industry. Over the next 20 years, U.S. servicemembers, including more than 52,000 wounded in action, and their families would largely carry the burden.

In Washington, House Speaker Nancy Pelosi, D-Calif, got ahead of the White House in recent days in pushing for sanctions directly targeting Russia's energy sector, the lifeblood of Putin's economy. The administration has been hesitant to target Russian oil out of concern such a move would also imperil the economies of the U.S. and Western allies.

Sens. Joe Manchin, D-W.Va., and Lisa Murkowski, R-Alaska, introduced a bipartisan bill to do just that. The legislation would halt Russian oil imports to the U.S. by declaring a national emergency, something President Biden could also do on his own.

"If there was a poll being taken and they say, 'Joe, would you support 10 cents more a gallon for the people of Ukraine?' ... I would gladly," Manchin said.

Whether that view is widely held in the United States could go a long way to determine if President Biden's popularity will rebound after sinking to dismal levels.

Sen. Mitt Romney, R-Utah, said the sanctions on Russia could raise interest rates, slow the economy and drive up inflation and gas prices. He suggested Americans were prepared to sacrifice.

"This comes at cost," Romney said. "Nowhere near the cost of blood that would be involved if we let (Putin) run amok but it is not without sacrifice."

American politicians have shown greater resolve about what lies ahead as Ukrainians have demonstrated, in President Biden's words, "pure courage" in intense fighting against Russian forces. There's also been a substantial change in European attitudes as the Russian military has pummeled Ukraine's biggest cities.

The German government also reversed its long-held policy of not sending weaponry to a conflict zone and announced it would send anti-tank and stinger weapons to Ukraine. The German government — one of several European nations that have been laggard in meeting NATO countries' pledge to spend 2% of GDP on defense by 2024 — said it would about triple its defense budget in 2022.

German Economy Minister Robert Habeck even called on his country to take on Putin in another way.

"If you want to hurt Putin a bit, then save energy," he said

Even Hungary, whose pro-Russian strongman President Viktor Orban resisted speaking out against Russia in the leadup to the war, has condemned Russian military action, expressed support for sanctions, and agreed to give temporary protection to Ukrainian refugees entering Hungary.

At the White House, officials say the stiffening of European allies' resolve came after many had showed some wariness about confronting the Russians. U.S. national security officials released a steady drip of intelligence for more than two months before the war that suggested Putin was intent on a full-scale invasion.

But even so, in talks with President Biden's national security team, some European allies seemed convinced — until right before Putin acted — that he would do something less than a full invasion.

Talk of reacting with half measures quickly melted away — even among some of the most reluctant European allies — once it became clear Putin had put his sights went far beyond disputed territories in eastern Ukraine.

Now, as the costs to Western economies mount, President Biden and allied leaders' pain threshold will be tested further. Asked about the administration's confidence in unity as the costs of the war rise, White House press secretary sought to turn the focus back on Putin.

Edward Frantz, a historian at the University of Indianapolis, said President Biden appeared to be headed toward a foreign policy "sweet spot" after the chaotic ending of the U.S. war in Afghanistan. In the final days of that war, 13 U.S. service members were killed in a suicide bomb attack as they assisted evacuation efforts at the Kabul airport.

As tangled and heart-wrenching as the withdrawal was, President Biden had completed a campaign promise of ending the war, something his three predecessors failed to do. It also allowed him to more fully turn Washington's attention to what President Biden sees as America's central foreign policy challenge: confronting the rise of economic and military adversary China.

"Now, instead, we're back to the Cold War," Frantz said. "If this is a long project — and it certainly seems it will be — the president now faces the challenge of selling to Americans why enduring some impact to our economy for Ukraine matters. That is not going to be easy."