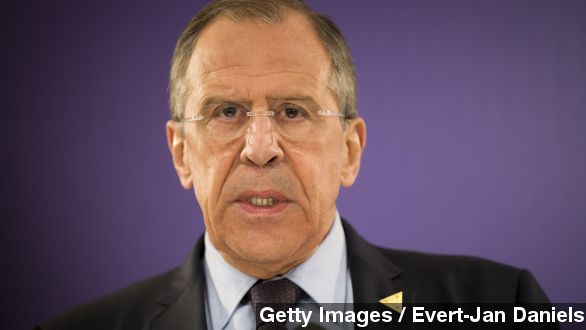 “The West keeps demonstrating that what it wants to do is not to change Russia’s policy — which would be wishful thinking as it is anyway — but to change the regime. This is basically not even denied by anyone,” Lavrov said at conference in Moscow Saturday.

Lavrov referenced heavy sanctions levied against Russia over the conflict in Ukraine — in which Russia continues to deny any military involvement. He said the measures are targeting Russia’s economic and social stability.  (Video via CNN)

Lavrov’s comments match the defiant tone the rest of the administration is setting in state media.

In an interview with state agency TASS this weekend, Russian president Vladimir Putin warned the sanctions could damage the whole region, not just Russia.

"We understand the fatality of an 'Iron Curtain' for us. We will not go down this path in any case and no one will build a wall around us. That is impossible!"

The U.S., for its part, isn’t backing down. During a visit to Kiev last week, Vice President Joe Biden maintained Russia’s behavior in Ukraine is “a flagrant violation of the bedrock principles of our international system.” (Video via Deutsche Welle)

Biden said the sanctions will remain unless Russia withdraws its military presence in the country and commits to a ceasefire. The last one in September was largely ineffective, according to UN observers. (Video via The Wall Street Journal)

More than 4,000 have died in Ukraine since fighting began in April.