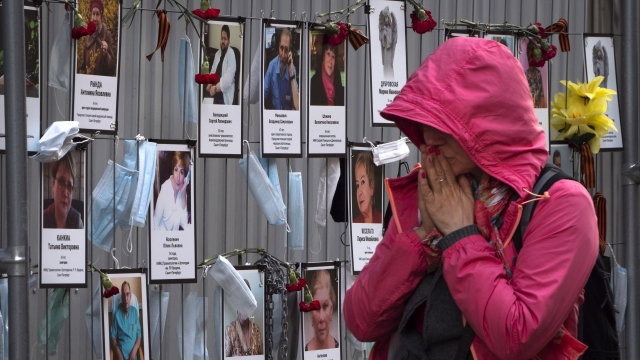 SMS
Field Hospitals Spring Up In Russia As COVID-19 Cases Top 300,000
By Peter Hecht
By Peter Hecht
May 21, 2020
New hospitals urgently go up as infections spread among workers in northern ports and gas fields.
SHOW TRANSCRIPT

Ambulance drivers are hitting the road as the coronavirus emergency deepens in Russia. The country's COVID-19 infections are second in the world, behind the United States. As of Thursday, Russia had nearly 320,000 cases and some 3,100 deaths.

The Russian government is downplaying the rising infection numbers. Officials instead credit a robust program that tested more than than 7.8 million people and accelerated medical evaluations.

But scenes around the country of fast-rising field hospitals suggests a peaked level of urgency. This is the scene at a northern Russia gas field, where a medical center has sprung up after a surge of infections among workers there.

Soldiers also raced to erect these medical tents in the North Caucasus republic of Dagestan, after an infectious spread in mountain villages in the region.

And near St. Petersburg, more than 1,000 people - nearly one-fourth of the workforce - were infected at a liquefied natural gas plant. That inspired the construction of another field hospital in a race to treat the sick.

According to official reports, nearly 10,000 Russian medical workers have been infected and more than 70 have died. Health care advocates say the number of dead is actually closer to 250.

Now medical workers, complaining of being underpaid and under-protected, are making direct appeals to President Vladimir Putin. Last week, paramedics uploaded this protest video, complaining they never got the government bonuses they were promised.

One said a manager told her: "Putin promised you payments. So let him pay you." Putin put the onus on regional officials. He said those "who work with coronavirus patients" must be rewarded.