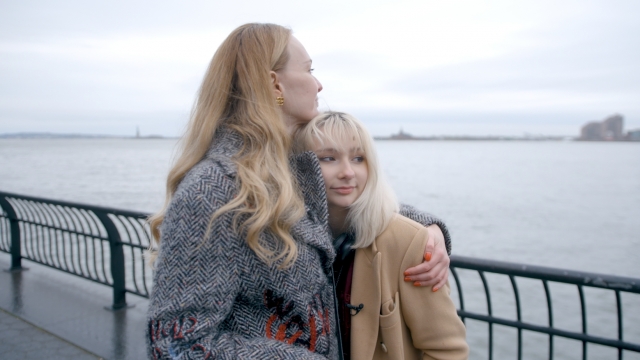 Of the more than 3.5 million people fleeing Ukraine, the Biden administration says the U.S. will welcome up to 100,000 Ukrainians and others fleeing Russia's aggression.

"When they get to the United States, they will be fully legalized and eligible after one year of being in the United States to apply for a green card," immigration attorney Ricky Palladino said.

But it's not so easy for some people fleeing Russian hostility.

For Barbara Mankova, a vacation to celebrate her 15th birthday in New York City turned into an ordeal.

"It is a nightmare," she said.

Barbara arrived in the U.S. with her mom, Kristina, on March 3 — two days after a department of Homeland Security cutoff that makes Ukrainians eligible for temporary protected status, or TPS.

"I'm sorry, I really respect your president but it's useless," Kristina said.

Barbara was born in Russia. She was living with her Ukrainian mother in Moscow.

But now they cannot go back to Russia because flights between the U.S. and Russia are banned. They lived between Moscow and Kharkiv, Ukraine, where Kristina's parents have their primary home.

"I don't know anyone who was standing here just because of the situation in Ukraine, you know, before [the] first of March," Kristina said.

Both outraged by the Kremlin's violence, shared their predicament on social media. They say if they go back, their lives will be in danger.

"I cannot [go] back because I'm afraid that after all my post on Instagram that people say of Ukraine and just Russia's bombing, actually I can be arrested," Kristina continued.

In Philadelphia, Palladino says the phone at his office doesn't stop ringing.

"We've gotten hundreds of calls," Palladino said. "Ukrainians that are seeking ways to bring family members or loved ones into the United States."

Approximately 34,000 Ukrainians currently in the U.S. do not have an immigration status. Those could benefit from TPS.

However, Palladino says the March first deadline is far from fixing the problem because after that day, more Ukrainians have continuously arrived in the U.S., escaping the war.

"It makes a ton of sense for the U.S. government to figure out a way to make these people legalized or temporarily legalized," Palladino said.

Returning to Ukraine would be dangerous. From New York, Newsy facetimed Kristina's friend, Sergey. He and his wife are stuck in Kiev.

SERGEY: You wake up not because you just like had a good rest, you wake up because of the siren or explosion or street fighting.

Meanwhile, this mother and daughter are stuck.

TURCIOS: If you don't qualify for TPS, what are your plans after your visa stay here expires?

KRISTINA MANKOVA: I don't know because I'm expecting and I really hope just tell the gods that the war will stop.

For now, they can't use the money they have in Russian banks because of the economic sanctions. Soon money will run out, but they say only time will tell about their future.