Russia's Use Of Cluster Bombs In Ukraine Is Sparking Global Outrage 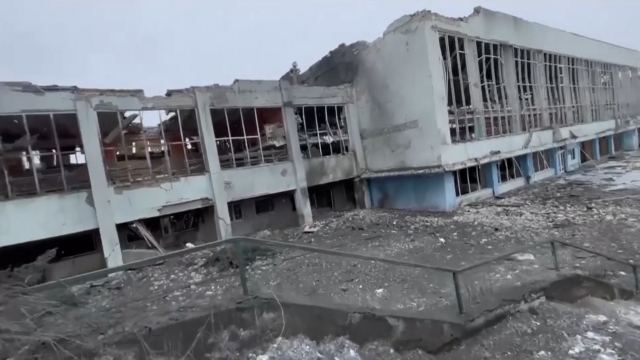 SMS
Russia's Use Of Cluster Bombs In Ukraine Is Sparking Global Outrage
By Sasha Ingber
By Sasha Ingber
March 7, 2022
Bellingcat's founder says Russia is using cluster bombs every day in its war on Ukraine, killing and injuring countless civilians.

Remains make up what used to be a sports center in Kharkiv. Residents there say Russian forces used cluster bombs, which release small, often fatal, bomblets over a wide area. But these shellings aren't new.

Outside Kyiv's National Military History Museum is a piece of a cluster munition that has been on display for years. Back in 2014, Russia used them in Ukraine's east and south. Now it's using cluster bombs again and open source investigators are documenting everything.

Eliot Higgins, the founder of Bellingcat and a Newsy partner, said: "What we're doing at the moment is creating an archive of verified materials from Ukraine and making it accessible to accountability groups who may be working on Ukraine in the future."

Higgins says Russia is using this indiscriminate weapon every day in its war on Ukraine, killing and injuring countless civilians and showing its hand.

"There's a number of different pieces of information we can get from these attacks, not only what kind of weapon was used, but also the direction of the attack," he said.

After they're launched, the front container parts of the cluster munition fall in a straight line, allowing researchers to trace the origin of the attack.

"What we've been able to do there is combine that kind of straight line drawing with satellite imagery and start identifying launch positions," Higgins continued. "Some of these are being launched from inside Russia into Ukrainian towns and cities."

And the munitions are linked to specific Russian military units, which were documented months before during the buildup.

"We can actually use that to establish where specific units are, and if we can establish the direction of fire, it reduces the number of units that could be involved," Higgins said. "And with that, we hope to start attributing some of these attacks to specific military units."

"We have to make sure that President Putin and the president of Belarus are held accountable for what they do," Stoltenberg said.

Daniel Balson leads advocacy for Europe and Central Asia at Amnesty International. He tells Newsy Russia has a long history of human rights violations in Syria, Georgia and Ukraine.

"Amnesty International documented cluster munitions strike at a preschool in Ukraine. The resulting strike killed three civilians, including one child, injuring another child," Balson said. "This is likely to be just the tip of the iceberg...I would say this is an all Amnesty effort at this point. Our organization is using the full breadth and scope of our capacity to uncover human rights violations in this conflict."

The worst part, he says, is that about 20% of cluster munitions fail to detonate, so even after this brutal war ends, death and destruction could continue for years to come.