Is Russia's US Ambassador Stepping Down? Russia Won't Say 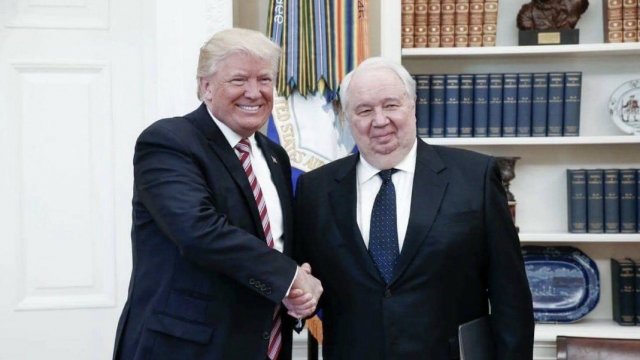 SMS
Is Russia's US Ambassador Stepping Down? Russia Won't Say
By Matt Picht
By Matt Picht
June 26, 2017
Russia's longtime ambassador to the U.S. might be stepping down from the role, but the country's foreign ministry won't confirm anything yet.
SHOW TRANSCRIPT

It sure looks like Russia is bringing U.S. Ambassador Sergey Kislyak back home. But the Russian Foreign Ministry isn't ready to confirm anything yet.

Multiple U.S. outlets reported Kislyak would step down from his post as part of a long-planned transition. The U.S.-Russia Business Council even announced a farewell dinner for Kislyak next month.

But Russian Foreign Ministry spokeswoman Maria Zakharova implied in a Facebook post that Russian President Vladimir Putin hadn't made a final decision yet.

She also slammed former U.S. Ambassador to Russia Michael McFaul as a diplomatic failure after he tweeted his well wishes to Kislyak.

Kislyak has been Russia's ambassador in Washington, D.C., for almost a decade, capping a long career of diplomatic service.

But he's also become entangled in the ongoing investigations into Russian interference in the U.S. presidential election. During the probes, multiple White House officials were scrutinized over their contact with Kislyak.

Russian Deputy Foreign Minister Anatoly Antonov is expected to fill in after Kislyak steps down — whenever that is.