Russia Warns US And Others Against Military Intervention In Venezuela 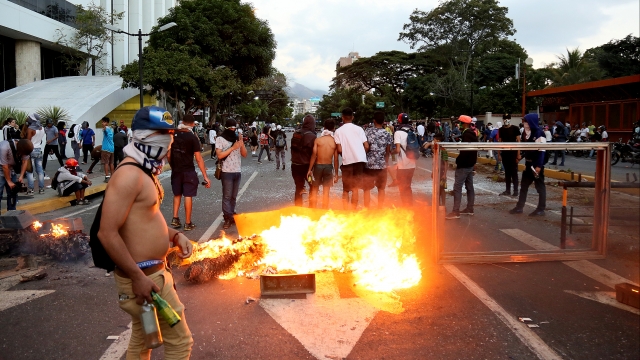 Russia is warning the U.S. and other countries not to launch a military intervention in Venezuela.

Russia's foreign ministry put out a statement Thursday saying the current situation in the country has "reached a dangerous point." But it says Russia is "alarmed" by the idea of foreign military intervention, warning that that option could have "catastrophic consequences."

Turmoil in the South American nation has been going on for years, but the unrest has been ratcheting up lately. Venezuelan President Nicolas Maduro started his second term this month, but many around the world view him as a dictator and not a freely elected leader.

Multiple countries, including the U.S., have put their support behind the opposition leader, Juan Guaido, who swore himself in as Venezuela's interim president.

The U.S. has already issued a number of sanctions against Venezuelan leaders and the nation's economy. But a senior administration official said those have only "scratched the surface of what actions the United States can take from an economic sanctions front."

As for additional intervention, the White House hasn't said what that could look like.

"We're not considering anything, but all options are on the table," Trump said.

"We have many options for Venezuela, including a possible military option," Trump said on Aug 11, 2017.