Russia Unleashes Most Widespread Strike Against Ukraine In Months 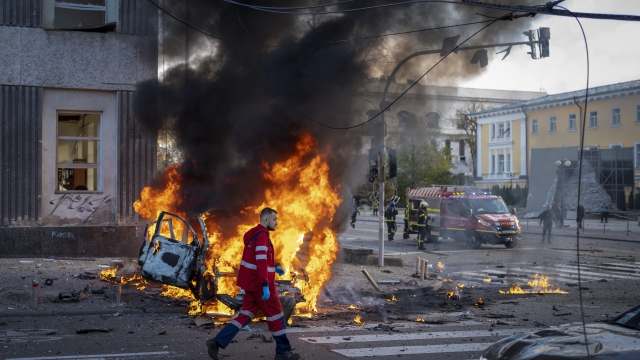 Russian President Vladimir Putin said the explosions were in retaliation for a Ukrainian attack on a critical Crimea bridge.

Horror and chaos unfolded in the Ukrainian capital of Kyiv, after Russia unleashed a string of missile attacks targeting bridges, power plants and other civilian infrastructure.

Russia launched at least 84 cruise missiles toward Ukraine, causing explosions that rocked at least a dozen cities including Lviv in the West and Kharkiv in the Northeast. The attacks left at least 14 people dead, with at least five of the deaths just in Kyiv.

The blasts shook cities that enjoyed relative normalcy recently, with most the fighting concentrated in the south and east of the country. The strikes on Kyiv were the first in four months.

"There was an explosion, everything was shaking," said Tetyana Lazunko, resident of a building damaged in the Zaporizhzhia blast. "We were here. If not I don't know what could have happened to us. Between the walls, here is the chair, and everything was flying, and I was screaming."

The gut-wrenching footage from the ground shows residents who are going about their daily routines suddenly finding themselves in the middle of a fiery nightmare.

Russia's strikes on Kyiv sent residents back into bomb shelters for the first time in months.

Russian President Vladimir Putin said during a televised address the strikes were conducted in retaliation, revenge for the Ukrainian attack on a bridge to Crimea and other attacks in Russia that Putin described as "terrorist" actions.

Along with Putin's accusations came a threat.

"If the attempts to carry out terrorist attacks on our territory continue, Russia's responses will be tough and proportionate to the level of threats posed to the Russian Federation," Putin said. "No one should have any doubts about this."

But amid the violence and terror came a rallying cry from Ukrainian President Volodymyr Zelenskyy, recorded outside the presidential office in Kyiv not far from where blasts rang out just hours before.

"They seek panic and chaos; they want to destroy our energy system," Zelenskyy said. "They are hopeless… They deliberately chose such a time, such goals, in order to cause as much harm as possible. But we are Ukrainians, helping each other. We believe in ourselves. We restore everything that was destroyed. Now there may be temporary interruptions in electricity, but there will never be interruptions with certainty - the certainty of victory."

It's a sentiment echoed by the Ukrainian people, even as they shelter in place underground in the subway. The national anthem reverberated off the dark walls, with a promise to keep the faith and keep fighting.