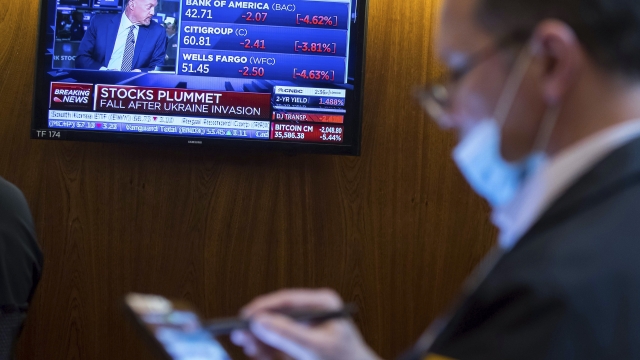 What's happening for Ukrainians is life and death. But for the rest of the world, many are thinking of the looming questions about broader implications of this war, economically and beyond.

"We're just pulling out of a pandemic recovery. Supply chains have been a big problem already, and this has the potential to add even more disruption to an already sort of fragile global supply situation," said Joanna Shelton, former deputy secretary general for the Organization for Economic Cooperation and Development .

"I think the most obvious place where people are likely to see a rise in prices will be at the pump," said Dr. James Goldgeier, Ph.D, professor of international relations at American University. "I think... we'll see the price of oil go up."

Together, Russia and Ukraine make up more than a quarter of global wheat exports. Wheat prices jumped to their highest level in ten years this week.

"Russia and Ukraine combined are major exporters of foodstuffs, including wheat, corn, sunflower oil that goes into everything from pasta, bread, and then a whole host of other foodstuffs," Shelton said.

Transportation costs are also likely to go up, with added shipping concerns.

"I doubt that any grain shipping company wants their ships to go into the Black Sea, pick up grain from Odessa and get out again, with Russian submarines and warships floating around offshore," said Vincent H. Smith, Ph.D, agricultural policy analyst at Montana State University.

Smith says low income countries will feel the impact of wheat prices the most.

Russia is also the largest producer of a key fertilizer component, with some U.S. producers warning about shortages heading into the U.S. growing season, which could mean higher costs for farmers.

And those aren’t the only ways life could get more expensive because of this war.

"They also are major providers of essential metals and gases, minerals, everything from palladium to copper, nickel, neon, and all those are used very, very widely in manufacturing of all kinds," Shelton said. "We could see an impact not only on... food prices, which are already rising, but also on such unexpected things as cell phones, dental fillings, cars, because cars use palladium in their exhaust systems. They also are big users of computer chips, which are already in short supply."

Beyond economic impacts, several humanitarian issues are at play.

"When I think about how to pay 10 cents more for a loaf of bread and think about complaining about that, I need to remember that in Kiev and in the eastern provinces of Ukraine, missiles are falling on innocent civilians," Smith said.

Economists are trying to figure out the global financial impact of the conflict, and some predict even higher inflation levels. But much of that depends on what happens in the coming days and weeks.

Shelton says it's important to consider how interlinked the U.S. is with the world. The country has a lot of natural resources, but the reality is no country can have a modern economy without relying on other countries and their supplies.