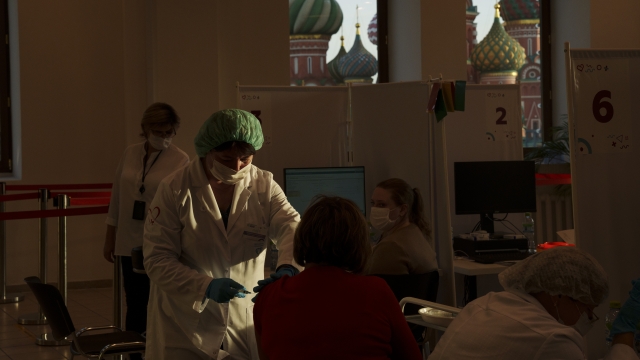 The daily number of COVID-19 deaths in Russia hit another high Tuesday amid a surge in infections that has forced the Kremlin to order most Russians to stay off work starting this week.

Russia's national coronavirus task force reported 1,106 deaths in 24 hours, the most since the start of the pandemic. The number brought the country's official pandemic death toll to 232,775, Europe's highest by far.

In a move intended to stem the spread of the virus, Russian President Vladimir Putin has ordered a nonworking period between Oct. 30 and Nov. 7, when the country will observe an extended holiday. During that time, most state organizations and private businesses are to suspend operations, and most stores will close along with kindergartens, schools, gyms and most entertainment venues. Restaurants and cafes will only be open for takeout or delivery. Food stores, pharmacies and businesses operating key infrastructure can stay open.

Access to museums, theaters, concert halls and other venues will be limited to people holding digital codes on their smartphones to prove they have been vaccinated or recovered from COVID-19, a practice that will remain in place after Nov. 7.

The new restrictions have encouraged more people to get immunized.

Olga Korina, a 82-year-old Moscow resident, said she was reluctant to receive a vaccine but changed her mind after she saw that a proof of vaccination would be required to attend concerts.

"Everything will be closed for us, and I love music so much," she said.

Putin has told local officials to order unvaccinated people older than 60 to stay home and to close nightclubs and other entertainment venues. Russian authorities also have strengthened the enforcement of mask mandates on public transportation and in indoor venues.

The Russian leader encouraged the worst-affected regions to start the off-work time earlier and possibly extend it beyond Nov. 7. Six of Russia's 85 regions began the idle period on Monday, and more joined them Tuesday. Moscow is to suspend work for most people on Thursday.

Russian authorities expect the time off will help limit the spread of contagion by keeping people out of offices and public transportation.

However, the sales of airline tickets and hotel bookings at Russia's Black Sea resorts surged on the news of the extended holiday, forcing authorities in southern Russia to shut down entertainment venues and limit access to restaurants and bars to customers with the digital health codes. Tour companies also reported a surge in demand for package vacations to Egyptian resorts.

The government has blamed the quick spread of the virus and soaring deaths on low vaccination rates. Only about 49 million Russians — about a third of the country's nearly 146 million people — are fully vaccinated.

"It's important to speed up the pace of vaccination, otherwise we won't be able to control the spread of infection," Prime Minister Mikhail Mishustin said at a Cabinet meeting.

Health Minister Mikhail Murashhko reported that nearly 90% of hospital beds are filled with over 268,000 COVID-19 patients, adding that authorities need to expand hospital capacity in the country.

"It's a colossal load on the health care system," he said.

Russia was the first country in the world to authorize a coronavirus vaccine, launching Sputnik V in August 2020. It has abundant supplies of the vaccine, but citizens have been slow to get shots, a trend blamed in part on conflicting signals from authorities.

In neighboring Ukraine, the vaccine uptake has been even slower. About 16% of the country's 41 million people have been fully vaccinated. Confirmed cases and deaths have increased over the past week, and the Ukrainian Health Ministry on Tuesday reported a record 734 deaths in 24 hours.

In the Baltics, which border Russia, authorities in Estonia are considering new coronavirus restrictions on top of the ones that took effect a day ago. Still, Estonia is seeking to avoid a general lockdown like the one neighboring Latvia has imposed to counter the rapid spread of the virus. Latvia's lockdown, which started Oct. 21 and runs until Nov. 15, includes a nationwide curfew, closes most stores and suspends entertainment, sports and cultural events.